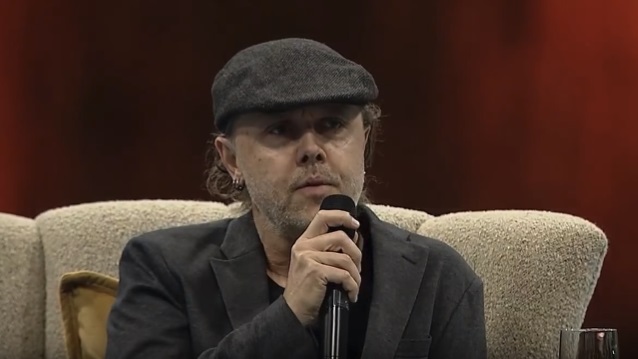 LARS ULRICH: 'We're Having The Best Year For METALLICA In Probably A Quarter Of A Century'

On November 9, METALLICA drummer Lars Ulrich was interviewed by Salesforce CEO Marc Benioff as part of this year's Dreamforce, Salesforce's annual user conference, in San Francisco, California. You can now watch the chat below. A couple of excerpts follow (transcribed by BLABBERMOUTH.NET).

On how METALLICA's music has managed to survive and grow, crossing generations:

Lars: "It's pretty crazy, 35 years in, that people still care at the level that they do. We just played three weeks in Europe. We're playing on a small in-the-round stage, and every single — and this is not to pat ourselves on the back, but more how dumbfounded we are about this stuff still happening — in every single building we just played in Europe in the last two, three weeks, we set a house attendance record, because we get more people in because our stage is smaller. These are the big indoor arenas in London, Birmingham, Glasgow, Belgium… They're all between 18 and 23 thousand — their version of the hockey and basketball arena. But it's pretty crazy that we continue to set attendance records. We're having the best year for METALLICA in probably a quarter of a century. And it should be no secret that we're obviously not quite a young as we used to be, but it's amazing that still at the concerts, half the audience that are down at the front row are 14 years old, 12 years old. They raise their hand when James [Hetfield], our singer, asks who's seeing METALLICA for the first time. And it's amazing that half the audience are experiencing METALLICA literally for the first time live. That is a crazy thing. It's, like, do they not know that we're old enough to be their parents? [Laughs] So we've had a lot of good fortune, and we're very appreciative and humbled. And I think the one thing that happens to you as you get older is that as you get older and you raise families yourself and so on, that's when you can really open your eyes and take it all in, slow down long enough to realize the moments that you're in, bringing people together, connecting people through music. You know, when we were 22 years old, we never stopped long enough to know what was going on, but now, 30 years later, you can really feel that impact that you're having on a global scale. So it's been an amazing, amazing year. And we still have about another year and a half of touring left. So we're just getting started. [Laughs]"

On the reasons for METALLICA's enduring success:

Lars: "I think it's two-fold. Number one is that from a creative point of view, you have to be willing to always look ahead rather than look behind. You have to turn over every rock, every stone and open your eyes, open your ears, be inspired, let those influences and all that great culture — whether it's music, whether it's art, whether it's film; whatever it is — just take you, and you have to be open to letting the process take you where it's gonna go. It becomes this interesting dichotomy between sort of steering it but also being open to letting… almost like hanging on, letting it kind of go where it's going and just making sure it doesn't derail, like a train, kind of. So, for 35 years, we've tried to never look back when we were making records, always try to challenge ourselves and see what else was out there that could inspire us to let the music take us some place differently. Secondly, when you're in a group, when you're in a collective, you really have to know how to work with other people. You have to learn empathy, you have to learn… when somebody else is steering, when you're gonna take a backseat and when you… that balance point about it's really important that this idea solidifies itself to somebody else in the band. Even though I may not personally agree with it a hundred percent, in terms of the balancing points of an internal dynamic that works in a group setting, you have to just know how to work with other people. When you're 20 years old in a group, in a music group, that's like being in a gang, and that's easy. When you're 50 years old and everybody gets their own patterns, and you talk to anybody — whether they're in THE ROLLING STONES or our friends in U2 or the RED HOT CHILI PEPPERS or any of the great bands that have been through Dreamforce in the last couple of years, being in a collective, being in a group, being in a band in your 50s requires a lot of work. We spend more time internally in METALLICA on just making the band function. We spend more resources on making the band function in terms of giving everybody the space they need. You know, somebody needs to take spring break off to go with their kids — we're not working that week. Somebody needs this, somebody needs that… It's all an open door, because the minute you do something that's gonna put a bandmember in a position of doing something where he has something else in his head, that's the beginning of the end. So you've gotta spend a lot of time working on the collective and the group dynamics. We somehow turned a corner maybe 10, 15 years ago — we all grew up a little bit, and we sort of reprioritized our outlook on life. The first 20 years of METALLICA, it was the band first and the individual and the family second. And about 10, 15 years ago, we swapped the model, and now it's the individual and the families first and METALLICA second, and that has given us a functioning dynamic that has… We're in better shape than we've ever been, and that's part of the reason, I think, we're enjoying the best time we've had in 25 years."

METALLICA played a benefit show earlier this month in San Francisco to raise money for victims of the recent Northern California wildfires.

Thank you @Benioff for having me as a guest at @Dreamforce today and showing me your incredible universe which occupies the @MosconeCenter for 4 days a year ... WOW!!! #DF17pic.twitter.com/r1Z2VFkHol