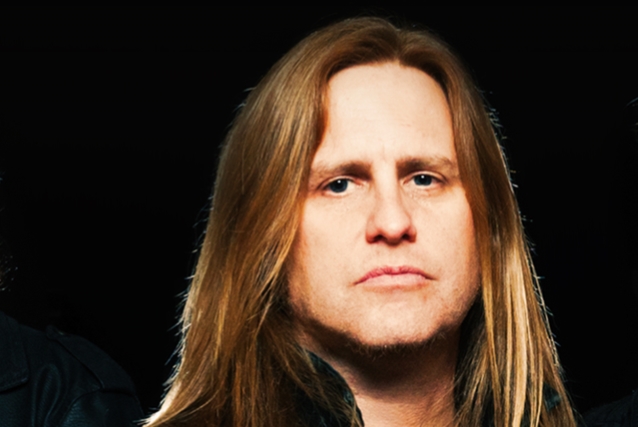 LAST IN LINE singer Andrew Freeman says that there are "a couple" of "dicks" in the DIO DISCIPLES camp who have prevented him from playing certain shows because of his involvement with Vivian Campbell.

The DEF LEPPARD guitarist, along with drummer Vinny Appice and bassist Jimmy Bain, was part of DIO's first incarnation, which reunited in 2012 alongside Freeman to form LAST IN LINE.

Asked in a new interview with the "Music Mania" podcast if web sites like BLABBERMOUTH.NET have "fabricated" a feud between LAST IN LINE and DIO DISCIPLES — which is made up of former members of DIO, along with a rotating lineup of singers, including former JUDAS PRIEST frontman Tim "Ripper" Owens — Freeman said: "I don't think it's a fabricated thing. I think that people give interviews and they speak their mind or they speak what their management wants them to say. And we have personal experiences with each other.

"I feel like it's clickbait a lot of times," he continued. "If you put that Vivian and [DIO DISCIPLES guitarist Craig] Goldy are arguing again or are talking about each other again, you're gonna get a certain amount of clicks on that. There's a few hundred or a thousand people who would wanna read that. I know I'd definitely read it — before, when I was a fan.

Although Freeman is on friendly terms with several members of DIO DISCIPLES, he admits that "there's a couple of guys in that camp that are dicks — to put it bluntly — but there's a few guys in that camp that are really cool. And personally, I've been affected by it, because I've been told, 'We can't use you [for shows] because you're playing with Vivian,'" he said. "But that doesn't come from the band guys — that comes from other places… They told me I wasn't gonna be able to do a gig because I played with Vivian. I was just, like, 'Okay.' But Vinny and Jimmy [Bain, late DIO and LAST IN LINE bassist] and Phil [Soussan, current LAST IN LINE bassist], they have no problem… Vinny will go out and play with DISCIPLES from time to time — he's still friendly with that whole crew. But I've had a couple of experiences with a couple of people, and I'm a realist, so I'm not gonna talk about you in the press — I'm gonna beat your ass; I'm gonna knock you out. [Laughs]"

Freeman also denied suggestions that LAST IN LINE, which is about to release its sophomore album, was a way of cashing in on Ronnie James Dio's legendary status, saying: "It's clearly not for us. I mean, I don't know what [DIO DISCIPLES is] making, but I'm sure it's not much different than what our guarantees are. But the difference between the two is that we're not depending on the RAINBOW catalog and the BLACK SABBATH catalog and the majority of the DIO catalog. Even though Vinny played on most of the DIO catalog and he played on Ronnie's BLACK SABBATH catalog. Jimmy played on the RAINBOW catalog and the DIO catalog, so there's a little more… When Vinny plays 'Mob Rules', it makes sense. When Jimmy played 'Stargazer', it made sense, 'cause he was inRAINBOW. He got thrown out of RAINBOW for partying too hard. So these guys, they're the real guys. I think that's the difference — this band is the evolution of those bands. And Vivian played in WHITESNAKE with [David] Coverdale, who was the DEEP PURPLE singer. I'm not slagging any of [DIO DISCIPLES'] pedigrees, but the pedigree of these guys, of our band, is the original guys who played on these tunes."

According to Freeman, he tries to keep out of any disputes involving the DIO band legacy. "I really kind of stay quiet [about] it, because it's not my fight — I don't really give a crap about any of it; I don't give a shit," he said. "But I definitely don't like it when it affects my work, when people don't wanna hire me because I play with a guitar player from one of the top-grossing bands in rock history. Don't tell me you wouldn't do it if the gig came to you. I'm playing with the guitar player from DEF LEPPARD — that's how I look at it. And honestly, screw LAST IN LINE — I love doing the band, but if I want my kids to eat and live better and I wanna stay in music, then I need to [keep busy doing] other things. So the whole DIO argument, for me, is just moot to me — I don't give a shit about it. The second it pops up, I'm out of the conversation, 'cause I don't care, dude — I don't care."

Despite his assertion that LAST IN LINE is a more genuine representation of the original DIO band's sound, Freeman believes that DIO DISCIPLES has every right to go out there and perform with a Ronnie James Dio hologram. "I think there's a market for everything," he said. "I think that band has fans and people love those guys — people love Goldy and they love Simon [Wright, DIO DISCIPLES drummer]. There's a market for them to be on the road and to do things that we don't do. So I can see why people would wanna go see them. I can see why people would wanna see a Dio hologram, because it's something different, and why not? There's been a Michael Jackson hologram here in [my hometown of Las] Vegas for longer than I've been here. And they did the Tupac hologram years ago, and that was really cool too. It's whatever you wanna do. If somebody wants to go see that, that's cool. I'd go see it."

In a 2016 interview, Vivian slammed DIO DISCIPLES, saying that the band has "zero credibility" as a Ronnie James Dio tribute project despite the fact that it is fully supported by the late singer's wife and manager, Wendy.

He added: "I wish he'd just say 'I'm sorry.' Maybe something happened behind closed doors that Vivian finds unforgivable. I just find that just so hard to believe. I don't know what happened between the two of them [Ronnie and Vivian], but maybe [Vivian] stepped over some boundaries and felt the heat. He got called on it and was let go."

In December 2017, Goldy said in a Facebook post that "certain members" of the original DIO band became motivated by "money" because they "didn't have the same heart for the fans" as Ronnie James Dio did.