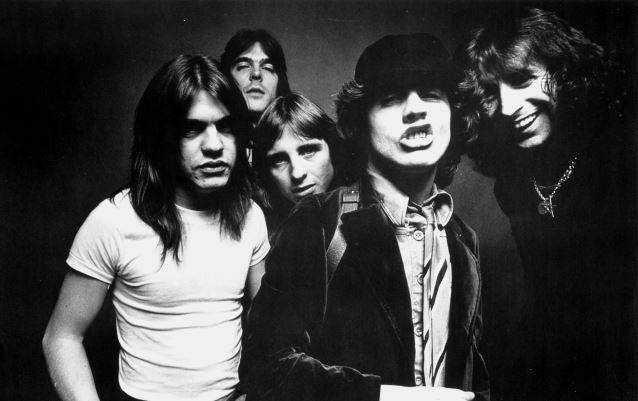 According to Billboard.com, late AC/DC singer Bon Scott is the subject of a new documentary, "Looking For Bon", which will explore Scott's life from 1970 to 1974. Narrated by David O'Hara ("The Tudors", "The Departed"),the film will be followed by a Bon Scott biopic, based a script written by late Australian music pioneer Vince Lovegrove (who shared vocals with Scott in THE VALENTINES in the '60s) and Angela Anagnostopoulos, focusing on Bon's years in AC/DC.

Producer Shemori BoShae ("American Federale"),who is among those spearheading the two projects, tells Billboard.com: "The purpose of the documentary is to chronicle what was a very creative period for Bon from 1970 to 1974 and give the viewer an insight into a very creative period of Bon's life and to enlighten all on just how great a singer he was before he joined AC/DC."

Bon Scott died on February 19, 1980 in London, England. He choked to death on his own vomit while sleeping in a friend's car. According to the AC/DC FAQ web site, he and the friend, a musician named Alisdair Kinnear, had been drinking the evening of February 19 and Bon apparently fell asleep during the ride home. Kinnear could not wake Bon, so he left him in the car to sleep. Kinnear awoke early in the evening on February 20, checked on Bon, and found him unconscious in the car. Bon could not be revived, and was pronounced dead.

In a 2010 interview, AC/DC guitarist Angus Young stated about Bon's influence on the band 30 years after the singer's death: "I think it's just something that is part of you. It's like you lost someone close to you, in your family or a very close friend. You've always got that feeling they're there but you just, I suppose, miss them in the physical sense. There's always memories that keep coming back to you, and it doesn't matter what the situation is. You could be traveling, you could be relaxing somewhere, or going to play or being in the studio, there's always something that reminds you."