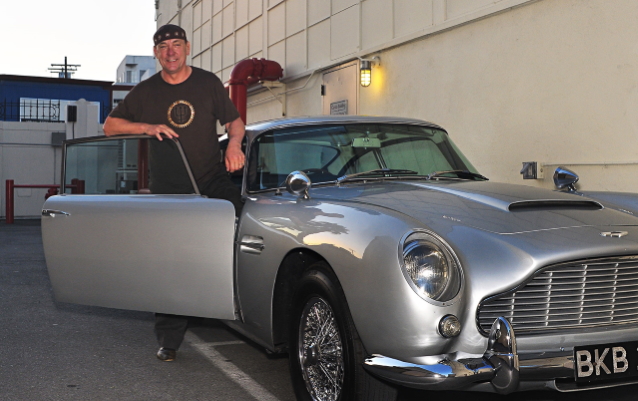 Gooding & Company, the official auction house of the Pebble Beach Concours d'Elegance, recently announced its offering of the world-renowned rock drummer and lyricist Neil Peart's collection of classic cars at its 17th annual Pebble Beach Auctions. The opportunity to bid on these extraordinary classic cars, dubbed the "Silver Surfers" by the legendary musician, will take place at the company's two-day sale on August 13 and 14, 2021.

In a newly released video report from KABC, Gooding & Company president and founder David Gooding stated about the collection: "Neil clearly was an intelligent man, very bright, and he thought very carefully about every car that he wanted to have in his collection." Check out the report below.

Considered one of the greatest rock drummers of all time, Peart had a highly distinguished career as the percussionist and lyricist for the groundbreaking band RUSH, hailing from Toronto, Canada. Since its early days, RUSH achieved immense global success and established a legacy as pioneers of sound, a feat no doubt made possible due to Peart's musical genius. Throughout his legendary career spanning nearly five decades, Peart inspired countless numbers of fellow rock stars and aspiring young musicians alike. He and his bandmates were inducted into the Rock And Roll Hall Of Fame in 2013, and received numerous other honors, including the Order of Canada, the country's highest civilian honor.

Neil also had a formidable intellect which was conveyed in his lyrics, books and numerous articles for a variety of publications. He was a prolific writer who constantly worked on his craft during his down time from the band. His profound lyrics based on literature, science, philosophy and his own life experiences dubbed him the name "The Professor" by the fans. He was revered as much for his lyrics as he was for his drumming, as certain recurring themes such as alienation, the angst of growing up, and the loneliness of being an outsider deeply resonated with a generation of young fans.

Peart's love of cars was a lifelong passion, and his hunger for knowledge included learning everything there is to know about automobiles, inside and out. Classic cars were what he dreamed of owning for many years, and upon purchasing his first, the 1964 Aston Martin DB5, he exclaimed that he had dreamed of owning this car since he was a boy. Finally in a position to purchase classic cars of this quality, he slowly and carefully acquired each car until his dream collection, the "Silver Surfers," was complete. Sadly enough, after bravely battling brain cancer for three and a half years, Peart passed away on January 7, 2020.

On the naming of his collection, Peart wrote: "The title 'Silver Surfers' for my collection of cars occurred to me while driving the DB5 up and down the Pacific Ocean. Because it felt right to me, I guess — the idea that I was just one of the wave riders.

"I had moved from Toronto to Los Angeles in 2000 (cherchez la femme),and in search of natural peace I often drove out that way and up into the Santa Monica Mountains. Out past Malibu to Ventura County, I'd weave along barren ridges of rock and vegetation, the ocean always on one big side. Some days would be misted by the marine layer, while other days the sun blared through a clear sky. The waves were slow and gentle, or churned out a powerful, rolling rhythm… It was during one of these drives when out of nowhere, it just occurred to me that the color of the ocean had influenced the silver palette of the collection. What other color looks as good in a blue photo? Not black, not white — silver. And a fortunate risk for the framers' art, too: silver frames."

"We are beyond honored and humbled to be entrusted with the sale of Mr. Peart's beloved collection of classic cars," states Gooding & Company president and founder David Gooding. "Neil Peart touched the lives of so many through his groundbreaking career in music, including my own, and we are confident that his personal curation of classic cars will resonate with passionate collectors, finding them new homes with the same appreciation for them as the icon himself held."