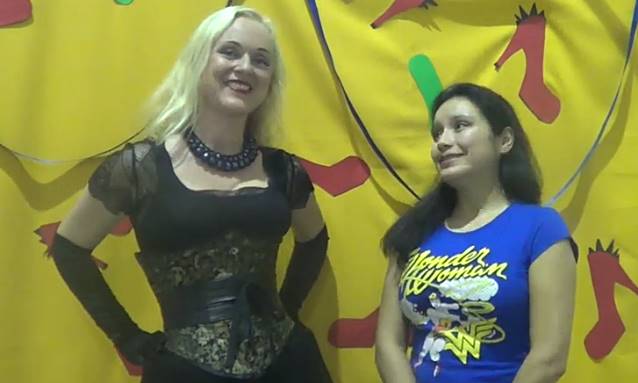 Metal-And-Highheels.com conducted an interview with Norwegian singer Liv Kristine Espenaes Krull of LEAVES' EYES on October 19 at this year's edition of the Metal Female Voices Fest at Oktoberhallen in Wieze, Belgium. You can now watch the chat below.

The official trailer for "Symphonies Of The Night", the new album from LEAVES' EYES, can be seen below. The CD will be released on November 13 in Spain, Sweden and Norway; November 15 in Germany, Austria, Switzerland, Finland and Benelux; November 18 in the rest of Europe; and on November 26 in North America via Napalm Records. The effort was produced by Liv's husband, ATROCITY singer and LEAVES' EYES co-vocalist Alexander Krull, at his Mastersound Studio in Germany. The cover artwork was created by Heile (a.k.a. Stefan Heilemann).

Audio samples of all the songs that will appear on "Symphonies Of The Night" can be streamed in the YouTube clip below.