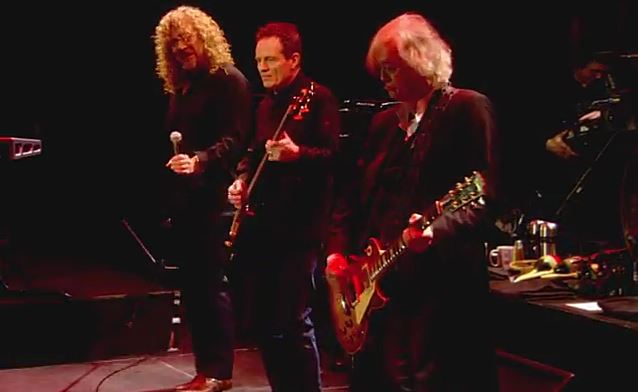 LED ZEPPELIN's classic track "Immigrant Song" is featured in the first trailer for the upcoming third movie in Marvel Studios' Thor franchise, "Thor: Ragnarok", due in theaters on November 3.

Official "Thor: Ragnarok" synopsis, per a Disney press release: "Thor is imprisoned on the other side of the universe without his mighty hammer and finds himself in a race against time to get back to Asgard to stop Ragnarok — the destruction of his homeworld and the end of Asgardian civilization — at the hands of an all-powerful new threat, the ruthless Hela. But first he must survive a deadly gladiatorial contest that pits him against his former ally and fellow Avenger — the Incredible Hulk!"

Following the appearance of ZEPPELIN's "Kashmir" in "Fast Times At Ridgemont High" (1982),almost two decades went by before the cult film "Almost Famous" (2000) showcased the ZEPPELIN tracks "Misty Mountain Hop", "The Rain Song" and three others, followed by "Immigrant Song" in "School Of Rock" (2003) and "Shrek The Third" (2007),and "Good Times Bad Times" in "The Fighter" (2010). More recently, "When The Levee Breaks" was featured in "Argo", while "What Is And What Should Never Be" appeared in "Silver Linings Playbook", followed by "Good Times Bad Times" in 2013's "American Hustle" and "When The Levee Breaks" in 2015's "The Big Short".