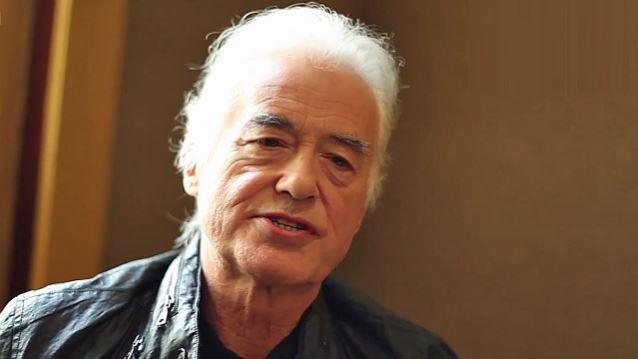 LED ZEPPELIN's JIMMY PAGE: JOHN BONHAM's Death Was 'A Massive Loss To Everybody'

Said Page: "[John] and I were really good pals. We were really, really close in our musical collaboration, if you want… the camaraderie. And just the sheer fact that, you know… 'Bonzo's Montreux' [the drum solo by John Bonham, which is the seventh track on the band's final studio album, 'Coda'] says it all, really. It was just the two of us working on it over there in the studio."

"[John's passing] was a massive loss to everybody. Everybody had been touched by John Bonham's music."

Page also spoke about where he thinks LED ZEPPELIN's music would have gone had if the band hadn't broken up following Bonham's death. He said: "John and I had discussed what the next album was going to be after 'In Through The Out Door', and… If I say to you, if you listen to what the sort of drumming he liked to play was, where he could really get into. And, you know, 'Bonzo's Montreux', the attitude of drumming on that. And he loved the riffs, he loved the riffs that I'd come up along with the way, he loved playing them, and he loved the whole, sort of, groove and swing to it, and he was keen to have a return to there on the next album, and so was I. I mean, that's a good illustration of when he was given a chance to make a drum orchestra, you can hear the attitude of it. But it would have had everybody's personality combined in it."

In a 2014 interview with Rolling Stone magazine, Page was asked why the band didn't take time to heal and rebuild itself following Bonham's passing in 1980.

"LED ZEPPELIN wasn't a corporate entity," he replied. "LED ZEPPELIN was an affair of the heart. Each of the members was important to the sum total of what we were. I like to think that if it had been me that wasn't there, the others would have made the same decision. And what were we going to do? Create a role for somebody, say, 'You have to do this, this way?' That wouldn't be honest."

He continued: "There were attempts [at reunion] that didn't work — trying to push it together in a hurry. That's why the [2007] show had to be done with such intent — rehearsing as much as we could so Jason [Bonham's son] felt he was part of the band as opposed to a novelty. He was filling big shoes, and we needed all of that."

"It wasn't just [Robert] going, 'I don't want to do it,' there were other things going on," Jason explained. "He told me, 'It doesn't matter how great you are on the drums, Jason. I love you to bits, and you play absolutely amazing. But John was the drummer in LED ZEPPELIN, and John was part of me and Jimmy and John Paul. We shared something very, very special. I struggle sometimes just thinking about trying to create some magic again when he's not there. He was a very, very dear friend of mine, that I miss every day.'"