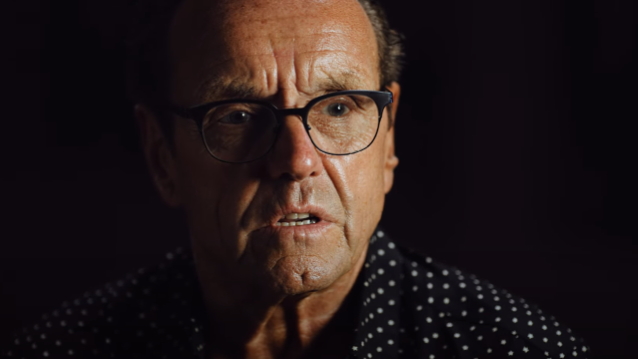 In Episode 2 of Gibson TV's "Through The Lens", we sit down with iconic rock photographer Ross Halfin.

Having studied fine art at the Wimbledon School Of Art during the 1970s, Ross had planned to be a painter but found art college too pretentious and creatively stifling.

According to his biography on RossHalfin.com, Halfin got into music photography almost by accident, sneaking his cameras into concerts by the likes of THE WHO, AC/DC, LED ZEPPELIN, MAN and FREE. Because Sounds, Melody Maker and the NME were interested in the punk scene, Ross also shot THE CLASH, THE SEX PISTOLS, THE JAM, ADAM ANT, THE ADVERTS, THE SPECIALS and BLONDIE, but he preferred bands with bigger, more eye-catching stage shows and rock stars who looked and behaved as such, not self-pitying, apologetic little weasels. He would spend the following decade travelling the world with such heavyweights as IRON MAIDEN, METALLICA, DEF LEPPARD, GUNS N' ROSES, KISS and MÖTLEY CRÜE in his viewfinder, and also worked as an official tour photographer for Paul McCartney, George Harrison and THE WHO, among numerous others.

Halfin has also shot album and singles sleeves, tour programs, posters, countless magazine covers (his iconic image of AC/DC's Angus Young graced Kerrang! issue No. 1) — in fact, just about anything that you could name. Basically, he's been there, done it.

Away from the world of music, Halfin has become increasingly immersed in travel photography.

"I had started out shooting a bit of everything, covering the punk scene to some folk and soul, and of course all of the rock stuff," he explains. "By default, I'm known as a rock photographer, but that's not really what I am. In the 1990s, when music began to change, I also started shooting other subjects. Travel photography became important to me; I had painted landscapes at art college and it felt like going back that."

Those images remained unpublished until "Sojourner", a book of shots captured during downtime on global assignments, which emerged via Genesis Publications in 2011. "I took them all for my own pleasure," he says. "My biggest regret is that I didn't become more interested in travel photography until later on in life. To me, there are few more beautiful things than the texture of an Asian sky."

Does Ross feel misunderstood? "Not exactly, but I'm definitely stereotyped," he responds.

To Halfin, there's one single definition of a good photograph. "It's something that will stop somebody in their tracks," he believes. "It should make them want to go back, look and examine in more detail. That's why it annoys me when designers put too many words over a magazine cover that I've shot. That image should sell the magazine, and not a silly font or a clever tagline."