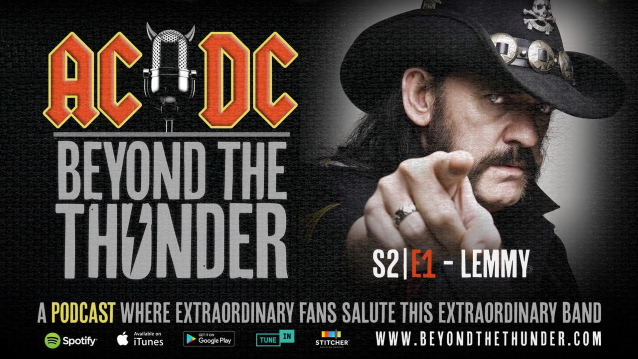 LEMMY Praises AC/DC In Never-Before-Heard Interview: 'We're Like Birds Of A Feather'

"AC/DC Beyond The Thunder", a podcast where extraordinary fans salute this extraordinary band, kicks off episode Season 2 this week with a posthumous interview from MOTÖRHEAD founder and rock and roll icon Lemmy Kilmister.

Captured before his death in 2015, this never-before-heard exchange features Lemmy trying to impress his date by bringing her backstage to an AC/DC show (and witnessing Bon Scott collapse),contemplating his all-time favorite AC/DC track (including one he covered),and answering the immortal question: "Lemmy or God?"

"AC/DC are a rock and roll band; they're like us," Lemmy said (hear audio below). "We don't play metal. AC/DC don't play metal. We're like birds of a feather." The mutton-chopped MOTÖRHEAD frontman also admitted that unlike his own band, "AC/DC have become an international event."

As AC/DC's best-selling hard rock album of all time, "Back In Black", celebrates its 40th anniversary this month, Season 2 of "AC/DC Beyond The Thunder" shifts into second gear, and is slated for many more high-profile guests from various walks of life, recalling their life-changing moments thanks to this Australian band.

Created by duo Gregg Ferguson and Kurt Squiers, "AC/DC Beyond The Thunder" originally set out to be a feature-length documentary film. After shooting on the Highway To Hell for years, Ferguson and Squiers approached AC/DC's management to seek partnership with the band for a worldwide commercial release. After countless attempts for a face-to-face, the duo sent a proof of concept edit for review, and while the band said they "weren't quite ready to make a historic film while still making history," AC/DC liked what they saw. But with no partnership, and no music rights from the band, "AC/DC Beyond The Thunder" was, for all intents and purposes, shot down in flames.

Wondering if the film would ever catch lightning, Ferguson and Squiers decided to unearth these wonderful stories of extraordinary fans discussing their affinity for AC/DC and harness that energy into a vehicle that just might work… a podcast. After capturing over 50 interviews and with a newfound momentum to create all new episodes with sound engineer, Eric Kielb, "AC/DC Beyond The Thunder" is back, serving up inspirational stories about the fans, for the fans, by the fans.