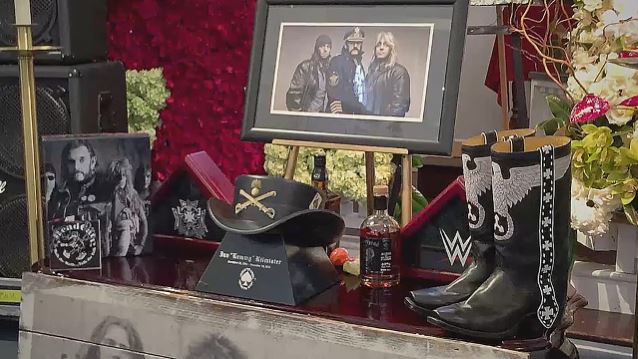 Rock n' rollers turned out in droves for his memorial with Dave Grohl, GUNS N' ROSES guitarist Slash and METALLICA members Lars Ulrich and Robert Trujillo taking the mic to share their experiences with Lemmy. Ozzy and Sharon Osbourne, WWE wrestler Triple H, TWISTED SISTER's Dee Snider and KISS's Gene Simmons were among the many attendees.

The memorial service was broadcast live on YouTube and was watched by more than 280,000 MOTÖRHEAD fans around the world.

According to StarTribune.com, Kilmister's family enlisted Pete Saari of the Eden Prairie, Minnesota-based company Foreverence to hand-deliver a custom-made urn to hold the rock legend's ashes. Customized with 3-D printing technology, the urn was made of all-black ceramic-like material shaped like Lemmy's trademark black cavalry hat, with his "Ace Of Spades" tattoo underneath and the lyrics, "Born to lose / Lived to win."

"As a music fan, it's an honor to do this for any musician like this, but especially musicians as distinctive and iconic as Lemmy," Saari told StarTribune.com.

The urn will be on permanent display in a columbarium at Forest Lawn.

Lemmy, who celebrated his 70th birthday on Christmas Eve, was told two days later that he had an aggressive form of cancer. Two days after that, he passed away at his home in L.A.

MOTÖRHEAD (and Lemmy) were legends in the eyes of metal and punk fans and performers, and he was especially beloved for his take-no-prisoners rock n' roll lifestyle.

MOTÖRHEAD's most recognizable song, 1980's "Ace Of Spades", recently landed on multiple Billboard charts for the first time. The song entered the Hot Rock Songs chart at No. 12, with most of its chart points from streams. The track also debuted on the Rock Streaming Songs chart at No. 24 after accruing 1.8 million U.S. streams in the week ending December 31, up 1,096% from 149,000, according to Nielsen Music. "Ace Of Spades" also came in at No. 8 on the Hard Rock Digital Songs chart, with 8,000 downloads, a 2,151% increase.