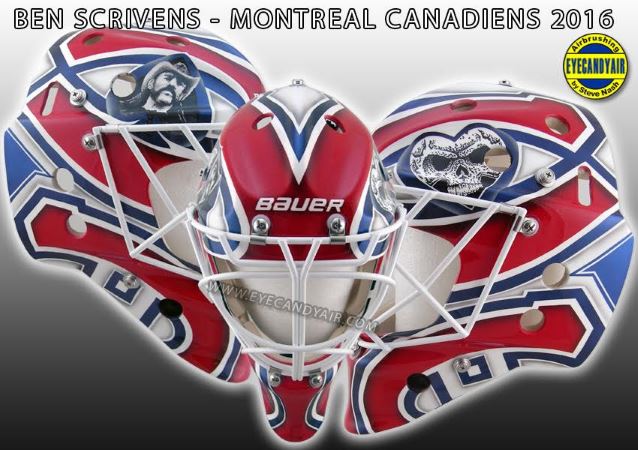 Eye Candy Air artist Steve Nash painted the mask, which features a portrait of Kilmister's head inside the ace of spades symbol on one side of the mask. "Ace Of Spades" is one of MOTÖRHEAD's most recognizable song.

"He's a huge influence on not just me, but a lot of the bands that I listen to and a lot of the type of music that I listen to," Scrivens told NHL.com. "For me, he's probably the epitome of heavy metal and rock music in terms of not just his music, but his attitude, his persona, his look. He's an ugly guy, he's got a gruff, ugly singing voice. He says what he thinks all the time, he's swearing all the time, and it wasn't an act. I think that's the thing that came across from him, nothing was for show. You knew that when he went home and talked to his kid he was probably the exact same way."

Scrivens added: "He was an innovator and influenced so many people in terms of their musical expression," Scrivens said. "He was a real connection between that early rock and roll, starting to get into that heavy stuff, to the METALLICAs and those bands. I don't think there was a heavy band that he didn't influence."

The other side features the logo of ALEXISONFIRE, a heavy metal band from St. Catharines, Ontario, Canada that has adorned previous masks worn by Scrivens.

Scrivens needed a new mask with the color scheme and logo of the Canadiens after being traded from the Edmonton Oilers organization on December 28, the same day Kilmister died.

"Ben just said we have to do this because I love that guy," Nash said. "All the credit to Ben. It was his idea. I just put his thoughts to paper. I think it came out really nice. Lemmy helps a lot with that cool factor. I guess you put Lemmy on anything and it will be cool."

The mask also has a more subtle tribute to MOTÖRHEAD on the backplate. There, the artist ghosted a representation of the band's logo and Nash put part of the lyrics to "Ace Of Spades" above that logo: "and don't forget the joker."