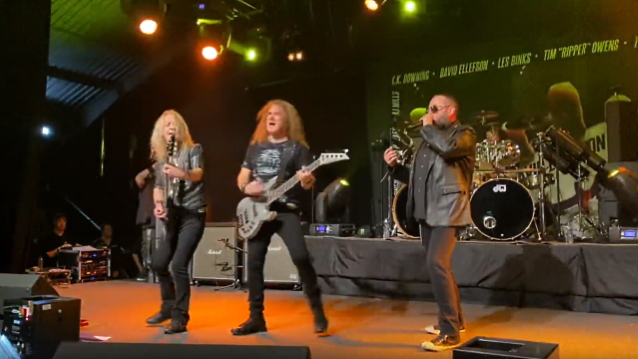 Asked in a new interview with The Cosmick View if he was surprised when he got the call from K.K. to be a part of the event, Les said: "I was in Ireland when I got a call from K.K. asking me to do a one-off show with him, Ripper and David Ellefson from MEGADETH at K.K.'s Steel Mill in Wolverhampton. This would be the first time I walked onto a stage with K.K. since I left PRIEST. We had limited time for rehearsal as David and Ripper were only arriving in the U.K. a day or two before the gig, but all went well and we had a blast. The audience was fantastic and excited to see K.K. back on stage doing what he does best. A great setlist which included material that PRIEST had never performed live before like 'Before The Dawn' and two songs from the Ripper era. It's a great night to remember and a lot of fun for all."

As for the possibility of this lineup performing again, Les said: "We all really enjoyed performing together, but it was billed as a one-off, so nothing more is planned at this stage. I think Ken would like to perform in some shape or form in the future, but at this stage, it's difficult as everyone has other commitments and it would be hard to get everyone available at the same time. Who knows… I guess it's a question of 'watch this space.'"