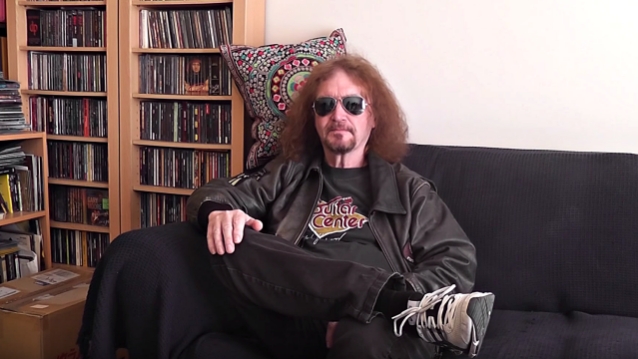 LES BINKS On JUDAS PRIEST: 'I Do Not See How They Could Possibly Do A 50th-Anniversary Tour That Didn't Have K.K. DOWNING Onstage'

Marko Syrjala of Metal Rules recently conducted an interview with former JUDAS PRIEST drummer Les Binks. An excerpt from the chat follows below.

Metal Rules: This is a bit of speculation, but if and when JUDAS PRIEST will someday to be elected to the [Rock And Roll] Hall Of Fame, would you like to attend that event?

Binks: "Well, that's an interesting question, because when I was speaking with K.K. [Downing, former JUDAS PRIEST guitarist], that whole subject was coming up because PRIEST had been nominated for that. And K.K. said to me, 'I know that this involves you as well, so you would be' — so I know that that is the situation. But of course, they didn't get it, and it went to some other band. Oh, BON JOVI, I think it was. And so, JUDAS PRIEST will probably get nominated yet again, but whether they actually are chosen, that's another thing. But I think if they're not chosen this time around, it's going to be too late because as you know, Glenn's [Tipton, JUDAS PRIEST guitarist] health is not good. We'd have to involve him. But the other thing, of course, is the 50th-anniversary tour next year. Now, it's rumored. They were suggesting that they were going to involve former members of the band. I do not see how they could possibly do a 50th-anniversary tour that didn't have K.K. Downing onstage. He was such a big part of the band throughout its entire career."

Metal Rules: But K.K. has indeed made the situation very difficult because of his recent statements?

Binks: "Well, I understand what you're saying, but when I met up with K.K., it sorts of altered my impression of him because I thought he was actually quite more accommodating and easy-going and it was a pleasure to be in his company. And I understand exactly his attitude about the relationship with Glenn, and Glenn is the dominant character in that setup. And how frustrating that must have been for K.K. because he had to put up with that for many years. But I also know one thing: I got on fine with Glenn. I like Glenn. I like them all, and I always thought they were all nice guys. So, I feel that the band as a unit on what they achieved, and throughout the entirety of their career right up until now. The last album, the 'Firepower' album, did really well. So, I think as a unit, and as an entity, it's bigger than any one of them. Do you know what I mean? Even Rob's [Halford, PRIEST singer] career, when he went solo, it didn't exactly hit the heights of success that he would have liked."

Metal Rules: I'm sure that the success wasn't what he expected, but it was also a tough time for metal music in general, not just for him, or PRIEST?

Binks: "Yeah. Well, I don't know about that. But, I think, Rob was then living in America and he still is — Phoenix, Arizona, I think. And he was still drinking quite a lot then and probably mixing with some rather dubious characters over there. [Laughs] I don't know. I know he'd cleaned himself up, didn't he? And he's been teetotalling now for a number of years. But I think, as you get older, you realize that your time on the planet is limited. You have a beginning, a middle and an end. And so, you have to think to yourself, 'There's no point in having silly bad blood for reasons that are really not that important,' when you look at it. And I think the fans would love to see K.K. back on stage. The first time I viewed a video clip of PRIEST, the current lineup with Andy Sneap, without Glenn and without K.K., I thought, 'This doesn't look like JUDAS PRIEST anymore.' You know what I mean? Well, they're playing the material, and they're all good players. Of course, you know I've worked with Richie [Faulkner, PRIEST guitarist] as well, so I know he's a phenomenal guitar player. I'm really, really happy for him. And he's a lovely guy, so that's another thing about Richie. He's got a good head on his shoulders, and he knows how to handle the situation and how to be diplomatic. I know there's been all these interviews, some with K.K., some with the band. 'Oh, K.K. said this,' and 'What do you think of that?' And then they'd say something bad. I mean the press love that, because it gets a headline. But I think if you got them all in the same pub if they were sitting here now, they'd be laughing and talking and getting on with each other within five minutes. You know what I mean? And that's what counts. And I think if they all got back on stage together, they'd have a ball. And the fans would love it."

As previously reported, Binks, Downing and ex-PRIEST singer Tim "Ripper" Owens will team up to perform "a full-length set of PRIEST classics" with MEGADETH bassist David Ellefson on November 3 in Wolverhampton, United Kingdom. Joining them on second guitar will be A.J. Mills of HOSTILE, the British metal band whose two albums, "Eve Of Destruction" and "The New World Disorder", were both produced by Downing.