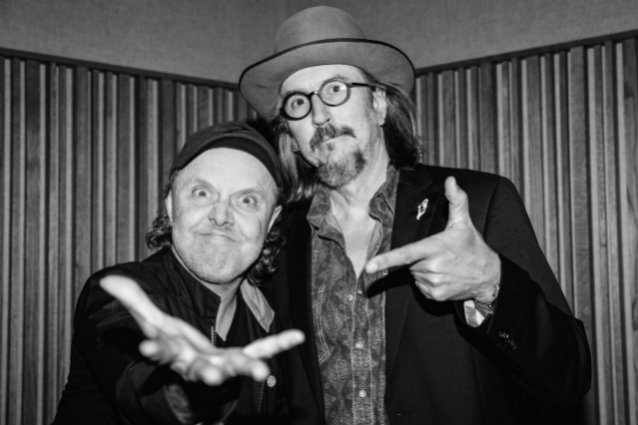 Lars Ulrich interviewed PRIMUS frontman Les Claypool on for the October 1 episode of "It's Electric!", the METALLICA drummer's online radio show on Apple Music's Beats 1. During the chat, Les talked about auditioning for the then-vacant bassist slot in METALLICA following the September 1986 death of the group's previous bassist, Cliff Burton.

"I got invited down," Les said (see video below). "It was a very honorable thing to be able to come down and play with my old buddy Kirk [Hammett] and the METALLICA guys. And I learned a couple of tunes, and I brought my bass banjo, 'cause I figured, 'Hey, this will work great with METALLICA.' So we all get in this room, it was a control room, and there's a there's a glass just like that, and Lars is on the other side of it. And he's, like, 'I can't hear James [Hetfield]. I can't hear James. I can't see James.' They're, like, 'Well, we don't know what to do. We can't fit you in the room.' [And Lars told them] 'Take the glass out.' And we all kind of chuckled, 'Hahahah.' 'Take the glass out.' Guys came in and removed the glass from the studio. Brain was actually playing [drums] in PRIMUS at that point in time. And I said, 'Dude, Lars couldn't see James, so he had the glass removed.' And [Brain is], like, 'Dude! You've gotta be kidding me! That's so heavy! That's unbelievable, man! He removed the glass! Oh my god!' But he just thought that was the greatest thing he'd ever heard in his entire life."

Claypool later told Citypages about Hetfield's comments: "I'd say, that's an untrue story. I mean, James said on VH1 'Behind The Music' that I was just too good, but ah, he and I were hanging out quite a bit during that time when they did the VH1 interview. And I said, 'What the hell are you guys talking about? You didn't want me. You thought I was a freak!' And he just laughed. Ya know, I showed up with a bleach blonde mohawk and wearing baggy skater pants, and two different colored tennis shoes. They were all in black with tight pants and the whole bit... But they have a great guy now; they've got Robert Trujillo, who's one of the nicest guys in the business."

Launched on May 7, "It's Electric" is an unscripted, unfiltered weekly window into the mind of Ulrich. Hear music that excites this great Dane, as well as chats with artists who inspire him... all wrapped in magnificently mindless banter!