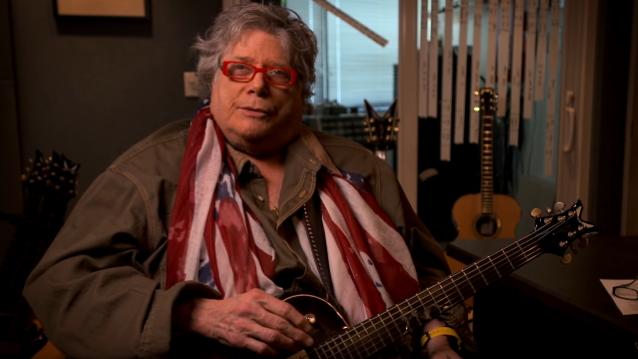 **Update**: Leslie West, the legendary guitarist, vocalist and original founding member of MOUNTAIN, has died at the age of 75.

West suffered cardiac arrest at his home near Daytona, Florida on Monday (December 21) and was rushed to a hospital, where he never regained consciousness.

The news of the 75-year-old rocker's deteriorating health was broken by his brother, who took to his Facebook page on Monday (December 21) to say that Leslie was gravely ill and near death after his heart stopped, and that he was put on a ventilator.

"I am asking for all your prayers," Weinstein wrote in a since-deleted post. "[Leslie's wife] Jenni is by his side in Florida but it's not looking good. Thanks Jenni, he wouldn't have made it this far without you."

Weinstein went on to say: "His heart gave out and he's on a ventilator. May not make it through the night."

Earlier today, TWISTED SISTER singer Dee Snider, who is apparently a friend of Leslie and Jenni, and has been in contact with the family, tweeted: "The final hours on this earth for the amazing Leslie West of MOUNTAIN. His voice and guitar will be silenced but his music will live forever. I am heartbroken. Prayers for him and his amazing wife, his rock, Jenni who is with him now. @lwestmountain".

Snider went on to acknowledge West's massive influence on rock music, writing: "Leslie West and MOUNTAIN are one of the founding fathers of heavy metal. His explosive, powerful guitar playing and seering solos helped define the genre. Attending guitarists gatherings with Leslie I saw ALL guitarists bow down before him (yes even @eddievanhalen)... And his influence on HIP HOP (You heard me!) is undeniable. His song Long Read has been sampled on over 750 hip hop tracks including Jay-Z 99 Problems. What an incredible force @lwestmountain was!"

After news of Larry West Weinstein's post made the rounds, several other legendary rockers offered their words of support, including KISS frontman Paul Stanley, who tweeted: "LESLIE WEST! The great MOUNTAIN is in need of our prayers. This gentle man and guitar hero needs all our positive energy, love and good thoughts now."

Stanley's KISS bandmate Gene Simmons added: "The great Leslie West !!! Our prayers are with you ..."

Joe Bonamassa wrote: "Prayers for Leslie. We all love you my friend."

GUNS N' ROSES guitarist Slash said: "Sending tons of positive energy to #LeslieWest to get better as quickly & thoroughly as he can. We're all thinking of him during this time. RnFnR! iiii]; )'"

For Barre, meeting Leslie in 1970 served to inspire the writing and playing on JETHRO TULL's most successful album in the band's history, "Aqualung". "Prior to going into the studio to record [1971's] 'Aqualung', I met Leslie, whose playing I absolutely loved," Barre revealed. "Leslie is well known for his association with Les Paul Juniors, and just after meeting him, I picked up a 1958 Junior because his sound was so incredible. I would say that he's the only guitarist who has ever influenced me directly."

Leslie was also influential in the development of the music for THE WHO's masterpiece, "Who's Next". In early 1971, he was invited to record with THE WHO for the band's initial New York City Record Plant sessions for the album, which sparked a close friendship with THE WHO's leader, Pete Townshend. Said Pete: "Leslie gave me a really great Les Paul Junior with one pickup on it for me to use on 'Who's Next', and Eric Clapton gave me an old Strat. They both gave me really good instruments and I still have those instruments today. Along with my Gretsch Chet Atkins, those three guitars were the only ones I used on 'Who's Next'."

Another fan of Leslie's was none other than Jimi Hendrix, with whom Leslie jammed at famed New York City clubs like Ungano's and elsewhere.

"I first met Jimi while I was recording 'Climbing!' at the Record Plant and he was in another room mixing 'Band Of Gypsys'," Leslie recalled. "Jimi came in, and after hearing the first track, 'Never in My Life', he looked over at me and said, 'That's a great riff, man.' I started shaking! There's a great picture of us playing together at Ungano's, and Jimi's playing Felix [Pappalardi's] bass. Getting to know and play with Hendrix is one of my greatest life experiences."

A life-threatening battle with diabetes cost West most of his right leg in 2011.

"I'm lucky it wasn't one of my hands or I'd be screwed," West later said. "It was a difficult struggle, and after the amputation I didn't know whether I'd ever want to or be able to perform again. But a month later I played at the Rock 'N' Roll Fantasy Camp in New York City, and I heard my guitar on stage and that was it. I knew I had to keep going."

In 2009, West married his wife Jenni. They exchanged vows on stage at the Woodstock 40th-anniversary concert. West credited her with saving his life — first with her love, and then by making the difficult decision to permit his doctors to amputate while he was in a coma.

My dear friend @lwestmountain is VERY sick. Prayers for one of the greatest...and an amazing guy. I love you, Leslie.

The final hours on this earth for the amazing Leslie West of Mountain. His voice and guitar will be silenced but his music will live forever. I am heartbroken. Prayers for him and his amazing wife, his rock, Jenni who is with him now. @lwestmountain

He has not left us yet. He is on his deathbed. Send some love and prayers his way for a safe journey to the other side.... https://t.co/zuGvpocEH9

And his influence on HIP HOP (You heard me!) is undeniable. His song Long Read has been sampled on over 750 hip hop tracks including Jay-Z 99 Problems. What an incredible force @lwestmountain was! He's still with us, but leaving very soon. Love and prayers for you my friend.

LESLIE WEST! The great MOUNTAIN is in need of our prayers. This gentle man and guitar hero needs all our positive energy, love and good thoughts now. pic.twitter.com/FeJ7VAzjYG

The great Leslie West !!! Our prayers are with you ... pic.twitter.com/GDk8jm0Kvo

Prayers for Leslie. We all love you my friend. https://t.co/GZ5vc5SVTo

Please keep Leslie West in your thoughts and prayers. https://t.co/amtGWkBhpr