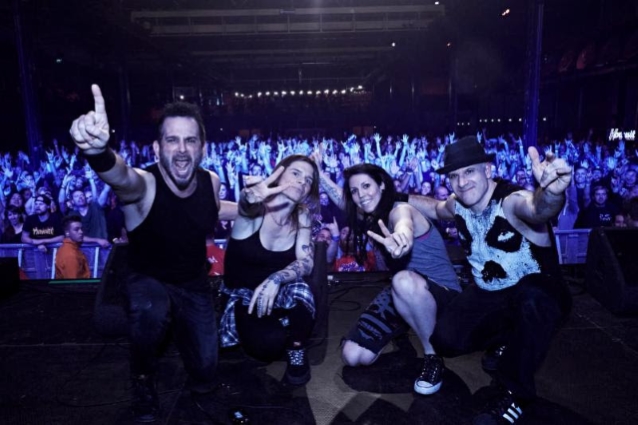 LIFE OF AGONY played a new song, "Empty Hole", during its concert last night (Friday, May 10) at the PlayStation Theater in New York City. Fan-filmed video footage of the performance can be seen below.

LIFE OF AGONY recently entered the studio with esteemed producer Sylvia Massy (TOOL, SYSTEM OF A DOWN) to begin recording its sixth album, "The Sound Of Scars", due this fall via Napalm Records. The recording sessions took place at Sylvia's Studio Divine in Ashland, Oregon. Additional recording took place at various studios in New York. Massy also handle mixing duties for the album. The disc will be the band's first since the addition of drummer Veronica Bellino, who replaced Sal Abruscato last year.

LIFE OF AGONY's sixth studio album will be a conceptual follow-up to the band's debut. Released in 1993, "Rivers Runs Red" told the story of a confused and disillusioned young man with low self-worth and a poor support network, who ultimately decides to commit suicide.

Bassist Alan Robert added: "And also the way that we're going about writing is kind of really getting back to the fun of writing. The last record, basically, there was a 12-year gap between albums, and we kind of got jaded from the music industry for everything that we went through. And now we're inspired again and having fun writing. It's kind of like the old days."

Continued Joseph: "[We're] sharing ideas again and listening to each other and checking out something someone has or an idea for a song that someone else has. And it's just really open and fun, and exactly what Alan said — it's fun again. Making music should be fun. 'Cause if it's not, there's an issue, there's a problem. And so far, it's been super. And you'll hear that in the music. And that's what I think a lot of people are missing in their music — that organic, fun aspect. You can hear that in people's music; you hear that in writing."

LIFE OF AGONY's latest album, "A Place Where There's No More Pain", was issued in April 2017 via Napalm. LIFE OF AGONY's fifth studio LP marked the band's first release since singer Mina Caputo (formerly known as Keith Caputo) came out as transgender in 2011.

Abruscato announced in December 2017 that he had "amicably" left LIFE OF AGONY. He has since been replaced by Bellino, a New York native who has previously worked with DMC, LL Cool J, Carmine Appice and Jeff Beck.