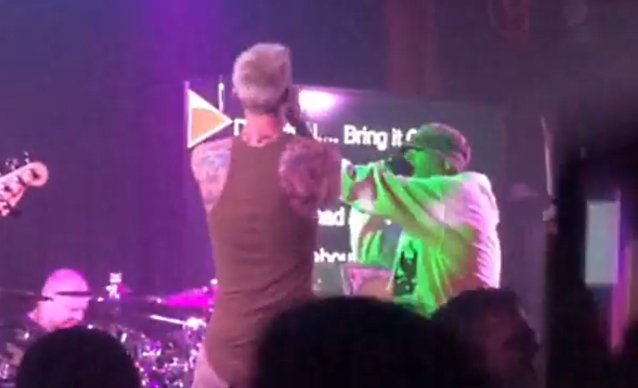 LIMP BIZKIT was joined by rapper Machine Gun Kelly for a performance of "My Generation" during the band's "Three Dollar Show Y'all" concert Tuesday night (March 5) at the Troubadour in West Hollywood, California.

The show's $3 ticket price was a nod to LIMP BIZKIT's 1997 debut album, "Three Dollar Bill, Y'all$", which launched the band into the spotlight with a cover of George Michael's "Faith".

Also seen in attendance at the concert were Marilyn Manson and SMASHING PUMPKINS' Billy Corgan.

LIMP BIZKIT recently returned to the studio to resume recording a new album.

Since the arrival of "Gold Cobra" more than seven years ago, LIMP BIZKIT issued four singles and promised to release a full-length collection of new material called "Stampede Of The Disco Elephants". That LP never surfaced.

this 3 dollar show far exceeded my expectations... the band covered heart shaped box while fred sang it with marilyn manson as billy corgan and mike muir watched... also david fincher was sitting behind me. #LimpBizkit #Art