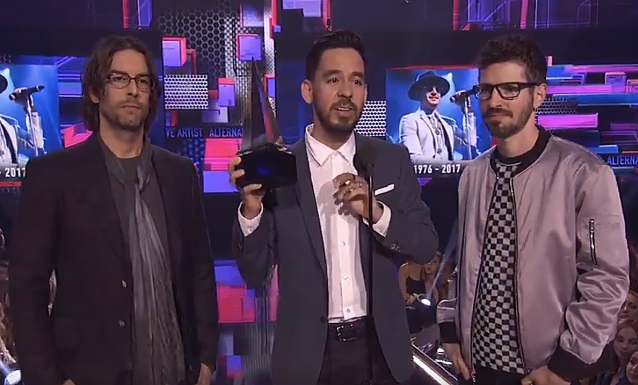 LINKIN PARK was honored with the "Favorite Artist - Alternative Rock" award at the 2017 American Music Awards, which was held Sunday night (November 19) at the Microsoft Theater in Los Angeles. They beat out other nominees in the category IMAGINE DRAGONS and TWENTY ONE PILOTS.

"First of all, thank you so much to all the fans here and around the world who voted for the band, who have supported the band through thick and thin," Shinoda said.

Acknowledging his fellow nominees, Shinoda added: I got a chance to talk to those guys … who said really wonderful things about Chester. And they were similar to the things that our fans said all around the world about him, and we wanna dedicate this award to him, to his memory, to his talent, to his sense of humor, to his joy.

"Remember, you guys — all of you, tonight — whether you're a fan or an artist, I want you guys to take a moment to appreciate what you've got and make Chester proud. Thank you guys so much," he concluded.

You can watch part of LINKIN PARK's speech below.

Bennington died on July 20 at his Los Angeles area home after committing suicide at the age of 41.

LINKIN PARK will release a concert album titled "One More Light Live" on December 15. Recorded on the band's "One More Light" world tour, it features 16 songs, including "Crawling", "Numb", "What I've Done", "Heavy" and the title track from the group's latest studio album, "One More Light".

"We want to dedicate this award to Chester, to his memory, to his talent" Favorite Artist - Alternative Rock goes to @linkinpark! ♥️ #AMAspic.twitter.com/KB0vKXdTJ5

Had an epic Instagram Story tonight—almost dodged security and made it through the show. Oh well. More importantly, thank you to the fans for this award. We love you too. #MakeChesterProud #TwoDudesWithNoSocialMedia @amas #amas2017