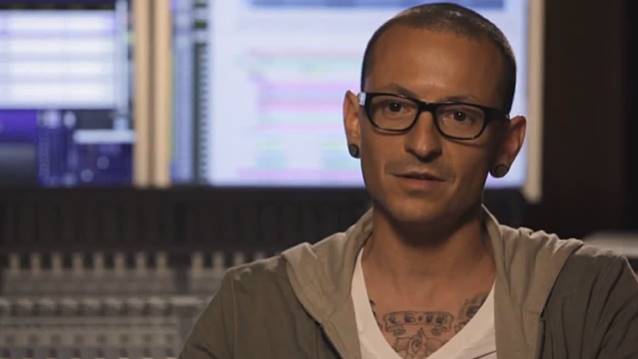 Metal Hammer editor Alexander Milas recently conducted an interview with LINKIN PARK singer Chester Bennington for the "Metal Hammer" radio show on TeamRock Radio. You can listen to the chat using the SoundCloud player below.

Asked if he is hurt by the criticism from some of the metal fans who say that LINKIN PARK cannot possibly be considered a "metal" band, Chester said: "It doesn't hurt, because I don't think we're a metal band either. That was actually something that we kind of intentionally wanted to make clear from the very beginning when we were kind of tagged as a 'nu metal' band. Not that we have anything against metal. It's like a facial expression, or like an emotion. It's like someone saying, 'He's an angry person.' And you're, like, 'I can be nice. I can be loving and I can be sensitive.' That's kind of how we feel about ourselves with our music. We aren't just one thing. So there are elements of the band that are metal, there are elements of the band that are pop, there are elements that are electronic, and hip-hop as well. And we've kind of always felt like we weren't bound to just one genre. So after we made 'Hybrid Theory' and 'Meteora', we really wanted to take risks beyond what we had already done on those first two records, creatively, and show the world that we can do a lot more than just make nu-metal songs."

Both Bennington and his LINKIN PARK bandmate Mike Shinoda have said that the band's return to heavier sounds on its new studio album, "The Hunting Party", is partially a reaction to the more subdued music currently being played on Modern Rock radio.

Bennington took it further, saying that "The Hunting Party" is also a response to the more electronic sounds of LINKIN PARK's last two records. He remarked, "We can write a thousand 'Iridescents' and, as great as they are, it's going to be boring. With this album it was more like the opposite… it's fucking crazy the whole time."

"The Hunting Party" is scheduled for release on June 17 and follows up 2012's more electronic-themed "Living Things".

Guests on the new album include RAGE AGAINST THE MACHINE guitarist Tom Morello, HELMET mainman Page Hamilton, SYSTEM OF A DOWN axeman Daron Malakian and rapper Rakim.