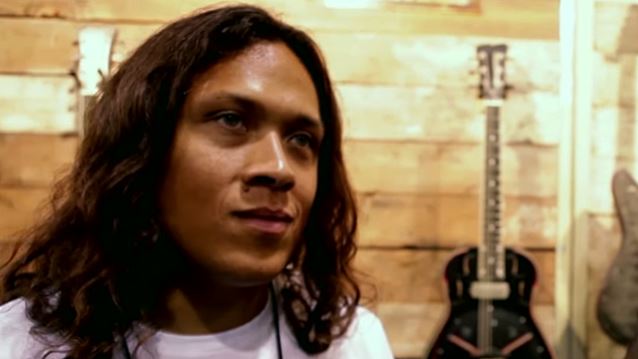 Joe Daly of The Weeklings recently conducted an interview with former AS I LAY DYING and current WOVENWAR guitarist Nick Hipa.

The Weeklings: When and how did the new band come together?

Nick: Last May, the fourth or the fifth [of May 2013], we played our last AS I LAY DYING show in Shanghai, China, and Tim [Lambesis, AS I LAY DYING singer] was arrested on the seventh [for hiring a hit man to kill his wife]. As the facts unfolded, it became apparent that Tim was in very serious trouble, and there were a lot of feelings there, because we were personally involved with everyone that was related to the situation. We talked among ourselves for awhile and we tried to reach out to the people who were truly victims of the whole thing. Ultimately we had to ask ourselves, "What are we going to do? What is our job? What are we going to do to survive after all of this?" I think that in early June we got together after spending a few weeks figuring out what was going on on the actual legal side, and then we started focusing on the present and the future. In that conversation, a few very specific things came up — do we keep on going as AS I LAY DYING or not? The immediate answer was "no," because Tim, in spite of the things that he was found guilty for, and some of the things he was wrestling with personally, was a great frontman and he was the face of AS I LAY DYING, so for us to try and continue on with that didn't feel right. Our natural response was to write music and start another band with a new name and just make it something completely separate from the past. When you invest yourselves in something for over ten years, you're building a career and you're developing a sound that everyone associates you with, but to move on in the same vein with a different person, I felt like would have forced that new project to always live in the shadow of the old. We just had to do something completely different and that's why we changed the name. We pretty much started writing heavily in June.

The Weeklings: You attended Tim's sentencing after remaining silent for almost the entire ordeal. Was that any type of comment on the situation?

Nick: Well, we had over a year to just kind of think about it, and we didn't really feel like it was necessary to comment on our personal feelings, because it's not really anyone's business. This happened and how we deal with this is how we want to deal with it, but Meggan [Tim's estranged wife] is a really good friend of ours. People don't realize that this woman was a part of our lives for ten years. She was like a sister to us. We toured together, when they adopted children, those children became a part of our lives, so they were our family. When people who you consider family are the victims of something so extreme, you support them and you care for them and you let them know that if they need anything, you will be there for them. And Meggan had reached out to us and said that it would mean the world for her if we could be there and support her. In my mind, there was no question — if you need us, we will absolutely be there. So we went to the sentencing just to support her as she gave her testimony and saw the person that tried to have her killed for the first time. So it was a very emotional experience for her and we were happy to be there to just give her some sort of validation and some strength.

The Weeklings: On two separate occasions, Tim has made statements that have sort of drawn you guys out to respond; one was a statement on AS I LAY DYING's official web site (since removed) and the other was the interview that he gave before his sentencing. Do you think this is the end of the "he said/they said" dynamic?

Nick: I would hope so. The entire time we didn't have to say anything about it. Again, it's a very private and personal matter. We had talked before and he was aware of how we felt and we were aware of what he did and how he felt about it. Also, the way he had been behaving for years, it was such a complicated dynamic. You can't express to the world how much is involved, so in our minds, it was like, "OK, this happened, let's just move on with our lives." The only reason we responded both times was because Tim took it upon himself to publicly make statements or make claims that weren't true, and when somebody says something that's untrue and that's defamatory toward you, you have to defend yourself. We would always choose the path of silence over trying to create drama, but when somebody challenges you like that and says things that are simply false, you have to set the record straight and in both circumstances we said something, it's because it was instigated. Moving on with our lives, we still have no desire to speak of his character as we had known it for the past few years. Clearly he needs a lot of time to work on some things and we had tried our hardest for years to pull him aside and get him to see things the way they were and not actually the way he thought they should be and it just didn't work, to the point where we felt like our voices were falling on deaf ears. And no pun intended — that's an AS I LAY DYING song — but we had just lost any sort of hope in getting through to him. Even still, when this all went down, we tried to just move on with our lives. I wish him the best — I was, like, "Dude, you have to figure a lot of things out" — but for one reason or another, I don't know if he was threatened by the fact that we were starting a new band or that he thought we were trying to continue as AS I LAY DYING, but he just chose to say things that diminished what we were doing. He was trying to hinder some of the progress we were trying to make personally, apart from him, and it's just unfair because it's very unnecessary. So our responses were warranted only in the sense that he was publicly trying to discredit us as people and as a new band moving forward.

Read the entire interview at The Weeklings.