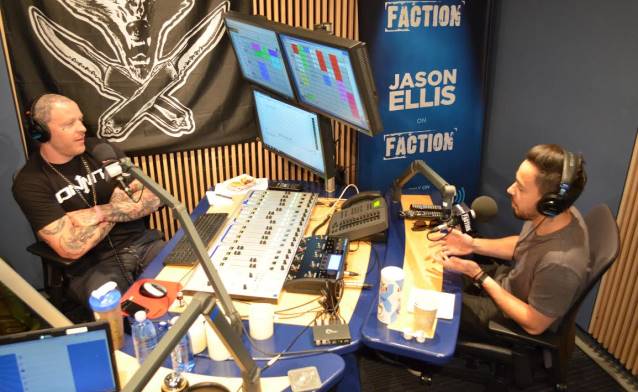 LINKIN PARK's MIKE SHINODA Denies Reporting SUBLIME WITH ROME To The Cops: 'We Didn't Call Anybody'

Did LINKIN PARK narc on SUBLIME WITH ROME for smoking weed at a music festival that the two bands performed at recently? SUBLIME WITH ROME frontman Rome Ramirez certainly seems to think so. The singer claimed that when the two bands shared the stage together not long ago at a radio festival in Tucson, Arizona, LINKIN PARK "called the cops" on SUBLIME because they were "allergic to pot." The police apparently arrived and did confiscate SUBLIME's weed while the group was performing, although no arrests were made.

However, LINKIN PARK frontman Mike Shinoda denied the accusation, telling "The Jason Ellis Show" on SiriusXM satellite radio (hear audio below):"Apparently, from [Rome's] perspective, we called the cops because they were smoking weed.

"First of all, if you were at this venue, there were a shocking number of police officers in the venue. Whatever happened, nobody called POT-911, 'cause [the cops] were there — they were standing outside the room. So I don't know what happened, I have no idea what happened with who. But I know that I didn't know anybody, I know Chester [Bennington, LINKIN PARK singer] didn't call anybody. We didn't call fucking anybody."

Asked if LINKIN PARK would ever call the cops on anybody smoking pot around them, Shinoda said: "Dude, we took… This is what I have to say about this… We took Snoop Dogg out on tour, we took CYPRESS HILL out on tour. Our second tour ever was with KOTTONMOUTH KINGS. The end. Did I put Snoop Dogg in jail? Why would I do that? I don't care. The main thing, from my end, is just that… if somebody did say something to somebody about, like, 'Hey, this is not so cool,' just keep in mind that we all have families and in our dressing room that day, there was, like, two of Chester's kids who are, I think, 8 and 10 or 12. So if somebody said something, like, 'Hey, man, you know, there's kids and stuff. Cut that shit out.' Which I'm not aware of — again, I don't fucking know who said what — but if they said it because there's kids around, I'm going, 'Yeah…' If I'm at my house, which is what our dressing room is, and somebody's got kids around and somebody says to me, 'Hey, can you cut that out 'cause there's kids?' That seems pretty reasonable."