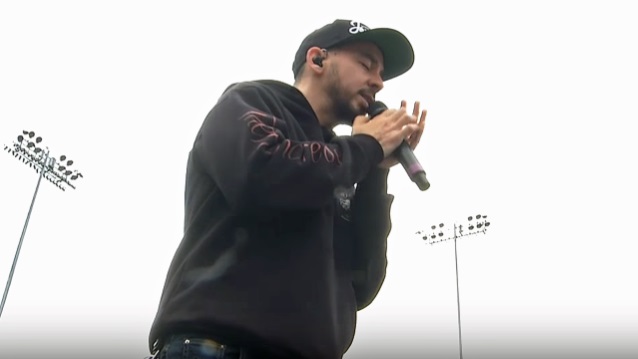 According to The Pulse Of Radio, LINKIN PARK singer Mike Shinoda played his first solo shows since the death of the band's co-vocalist, Chester Bennington, on Saturday (May 12) at the KROQ Weenie Roast in Los Angeles and Sunday (May 13) at the Identity LA festival, also in L.A. Shinoda mashed up some LINKIN PARK songs along with his solo material, singing some of Chester Bennington's parts from songs like "Bleed It Out". He played "In The End" on piano and let the fans sing most of Chester's vocal parts, though at times he came in and sang his parts.

Shinoda's set at the Identity LA festival was nearly twice as long since he was headlining and featured a guest appearance from LINKIN PARK DJ Joe Hahn during the song "Castle Of Glass". Shinoda and Hahn last performed together at LINKIN PARK's Chester Bennington memorial show at the Hollywood Bowl in October 2017.

He has revealed that DEFTONES frontman Chino Moreno and rapper Machine Gun Kelly are among the guests who appear on the LP.

Shinoda has said that he wants LINKIN PARK to continue, but that he isn't sure how the band would go about doing that at this point in time.