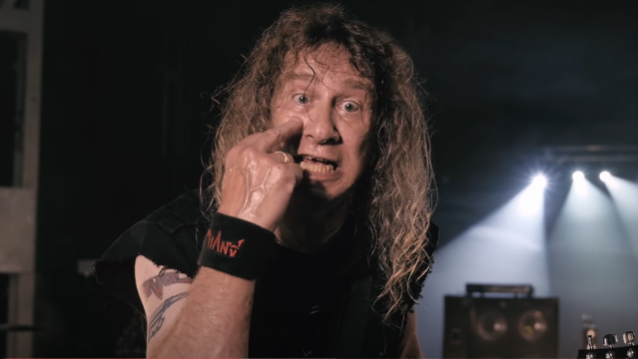 Guitarist/vocalist Steve "Lips" Kudlow of Canadian metal pioneers ANVIL spoke to Metal Temple about the fact that he and his bandmates failed to break through to the mainstream success enjoyed by many of their peers.

"When people go, 'Hey, man, they could have been bigger.' I don't wanna be bigger," Lips said (as transcribed by BLABBERMOUTH.NET). "I'm very fucking happy. I'm making a living doing what I love, and I'm playing all over the fucking world. Fuck you. If you want me to be AC/DC, you're fucking dreaming. We're not a commercial band — never were, never wanted to be. What kind of fucking judgment is that? It doesn't even make sense.

"There are real singing guys [in rock and metal]. Bruce Dickinson [IRON MAIDEN] I would classify as real singing. [Rob] Halford [JUDAS PRIEST] only to a certain degree. He also falls into the category of a character. [DEEP PURPLE's Ian Gillan is] also a character. There's limitations. Yes, he's got the ability to scream. We like his voice, but it's a character voice. … He did 'Jesus Christ Superstar'. He gets my approval. Ian Gillan is part of that…

"There's a lot to be said about what we're talking about," Lips added. "But character singing is by far the highest caliber and the most identifiable. So when you hear Lemmy, you can't imagine… You don't say, 'What would MOTÖRHEAD sound like with a real singer?' It wouldn't be MOTÖRHEAD. How can you say MOTÖRHEAD without Lemmy? Like, fucking go away! ANVIL without Lips is not ANVIL. Certainly JUDAS PRIEST without Rob Halford is not JUDAS PRIEST. They tried it; it didn't work. They got a soundalike [Tim 'Ripper' Owens], but no one accepted it, did they?

"Most of what metal is is the identity of that voice. It's not how great the guy sings; it's the sound of it that you immediately go, 'I know who that is.' And that's what the whole fucking thing is. It's like having the brand name. It's the audio of the brand name."

As previously reported, a remastered edition of ANVIL's acclaimed documentary, "Anvil! The Story Of Anvil", will be released in theaters this fall and on digital later this year via Utopia alongside Portobello Electric.

The new version of the film will arrive in time for its 13th anniversary and will feature remastered picture and sound, as well as a new exclusive epilogue interview with director Sacha Gervasi and Kudlow and ANVIL drummer Robb Reiner moderated by former MTV host Matt Pinfield.

The remastered "Anvil! The Story Of Anvil" will receive its premiere in conjunction with Beyond Fest on September 22 in Los Angeles at the Saban Theater, where ANVIL will also perform, along with appearances from surprise musical guests. This will be followed by a question-and-answer session with Kudlow, Reiner, producer Rebecca Yeldham and Gervasi, moderated by Steve-O from "Jackass".