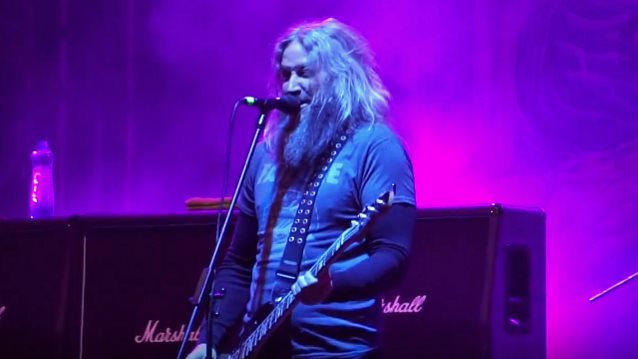 A 360-degree teaser for the cover artwork of the new MASTODON album can be found at eos360.mastodonrocks.com. The site also includes a 45-second clip looping of one of the songs from the record, which is tentatively due in March.

MASTODON's follow-up to 2014's "Once More 'Round The Sun" album was once again helmed by famed producer Brendan O'Brien, who first collaborated with the band on their 2009 groundbreaking concept album "Crack The Skye".

MASTODON recorded the new disc at the Quarry in Kennesaw, Georgia before moving to Henson Studios in Los Angeles for the mixing stage. Songtitles set to appear on the disc include "Show Yourself", "Precious Stones" and "Your Own Blood".

MASTODON has confirmed a spring U.S. headline tour, which will kick off on April 14 in Missoula, Montana, with support from EAGLES OF DEATH METAL and RUSSIAN CIRCLES. The tour also includes stops at several festivals, including the Carolina Rebellion on May 5.