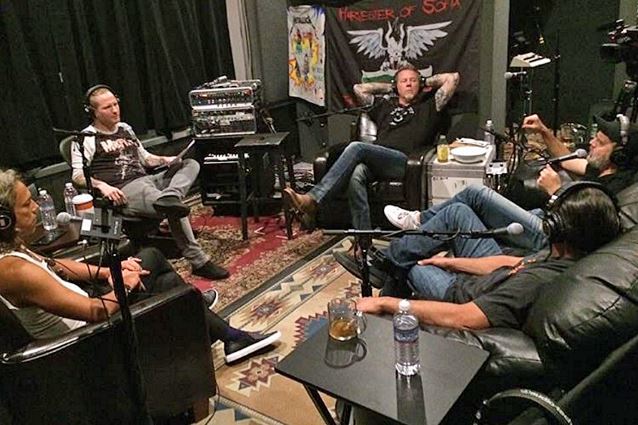 SLIPKNOT and STONE SOUR frontman Corey Taylor travelled to San Rafael, California on Friday, November 11 to conduct an in-person interview with the four members of METALLICA. The chat, which was taped at METALLICA's headquarters, is part of a 90-minute special about the band's new album, "Hardwired… To Self-Destruct", that aired on select radio stations around the country beginning this past Friday, November 18.

You can now listen to Taylor's interview with METALLICA using the SoundCloud widget below.

Asked by Taylor about the "sense of loneliness" and "loner vibe" in the new METALLICA song "Atlas, Rise!" and whether it's something the members of METALLICA have always identified with, drummer Lars Ulrich said: "For me, that will never change. Especially with the generation… whether it's the DEEP PURPLE, BLACK SABBATH and LED ZEPPELIN generation, or whether it's the IRON MAIDEN, JUDAS PRIEST, MOTÖRHEAD, SAXON, and fill in all the rest of 'em, I'll always be… forever we'll always be a fan of those generations, because it was what we grew up with, it was what made us who we are, it's in our DNA. So I'll always be a fan of that stuff and music in general. I don't think, for me… Thirty-five years later, no matter what METALLICA has become or any of that, that hasn't changed."

Added guitarist Kirk Hammett: "For me, I'm still a fan of that same period that Lars just talked about — the '70 and early '80s — and for me, I've been so influenced and so inspired by the music that was back then. And now, as a working musician for 35 years, 40 years or so, that period of music has become a point of reference for me too. When I need some inspiration or some influence or just even information, I go that time period and I feel like a fan."

Stated guitarist/vocalist James Hetfield: "Corey, I like what you said about the 'loner' thing. And there's a part of me that loves being a loner — just loves it, and craves it — and that whole lone-wolf attitude, it's just… it's so… I don't know… it's comforting. But then the other side of that is I've got the weight of the world on me, I have to do everything myself and I'm a martyr now and then I become a victim and all of this crap. So you're right when you say that loner part and the responsilibity around it too. I think that's kind of… you summed the song up."

Taylor recently singled out METALLICA's "Master Of Puppets" as "the greatest modern heavy metal album ever made." He said: "The first time I heard 'Master Of Puppets', it honestly changed my life.

"'Master Of Puppets', to me, is the greatest modern heavy metal album ever made. Pound for pound, songwise, musically, sonically, production — it's just fantastic.

"I know dudes who will fight me over that stuff because we're so nerdy on it. But to me, that is the template for every great heavy metal album."

"Hardwired... To Self-Destruct" was released on Friday, November 18. The effort contains a dozen songs and nearly 80 minutes of music spread out over two discs.

Don't miss the Metallica, "Making of" interview on Friday at 7p. Corey Taylor will be doing the interview. Check out the promo below. pic.twitter.com/6FBNR8a8vP