HALESTORM's third covers EP, "ReAniMate 3.0: The CoVeRs eP", can now be streamed in its entirety below. Released on January 6 via Atlantic, the effort was produced by Nick Raskulinecz (FOO FIGHTERS, ALICE IN CHAINS, KORN).

"We are so excited to finally unleash our latest cover EP, 'ReAniMate 3'," said Lzzy Hale of HALESTORM. "On this EP we were inspired to push the limits and challenge the ears of our fans. There are some surprises that you may not have expected from us, and there are also things that you've always wanted to hear from us. We were so incredibly honored to work alongside producer Nick Raskulinecz. He truly helped us bring these songs to life and find a way to make them HALESTORM's."

01. Still Of The Night (WHITESNAKE cover)
02. Damn I Wish I Was Your Lover (SOPHIE B. HAWKINS cover)
03. I Hate Myself For Loving You (JOAN JETT & THE BLACKHEARTS cover)
04. Heathens (TWENTY ONE PILOTS cover)
05. Fell On Black Days (SOUNDGARDEN cover)
06. Ride The Lightning (METALLICA cover)

Speaking about how HALESTORM goes about picking which songs to record for series of covers EPs, bassist Josh Smith told RingRocker.com: "We start out with basically everyone… Our team… Oh my God! My dad finds out that we're doing a cover album, all I get is texts: 'Oh, you should do this.' But anyone… anyone who finds out we're doing a covers album, all of a sudden you're just getting this crazy list. So it literally starts out with e-mails of lists and lists, and somehow, over months, we kind of whittle down our list until we get to a short list of maybe ten songs or less. And then we record 'em and see what works and see what we like."

According to Josh, there is at least one added benefit to covering other people's songs when it comes to HALESTORM working on original material. He explained: "What's really cool is that when we do pick these songs, they really do influence us, because it's Songwriting and Performing 101. Where you have to deconstruct a song — a legendary song, essentially — you deconstruct it, and then rebuild it to how it works for us. And it really influences us in a lot of ways. For example, that album certainly influenced a lot of songs and ideas and gears on our newest album."

Added drummer Arejay Hale: "When we did 'Slave To The Grind' [from SKID ROW], we were, like, 'Oh, man! We need a song like this.' And then we wrote 'Love Bites', which is pretty much just off the feel of 'Slave To The Grind'. It's cool, 'cause we used to do that. We used to do three- or four-hour shows with covers and originals. And you're right — it is like training. And I always recommend that for newer artists, younger artists that wanna learn how to play drums or guitar. I always say the best way to really get good and learn how to develop your own style is to learn the styles of other people and learn other songs that you like or that challenge you. And it kind of makes you think differently. It's, like, 'Oh, this guy did these chords,' or, 'This guy played this kind of groove.' 'I bet I can do that in an original song.' So, yeah, it's kind of like training."

Lzzy Hale recently told Swedish outlet RockSverige that HALESTORM is continuing to write material for its next album, tentatively due next year. Hale revealed: "You have no idea the weird songs I've been writing, subject matter and musically. Musically, it's kinda been a long journey to the beginning, so we're kinda going back to our total roots. We're gonna do a rock record this time. It's like total balls to the wall, but lyrically, it's been a little weird and that's my fault." 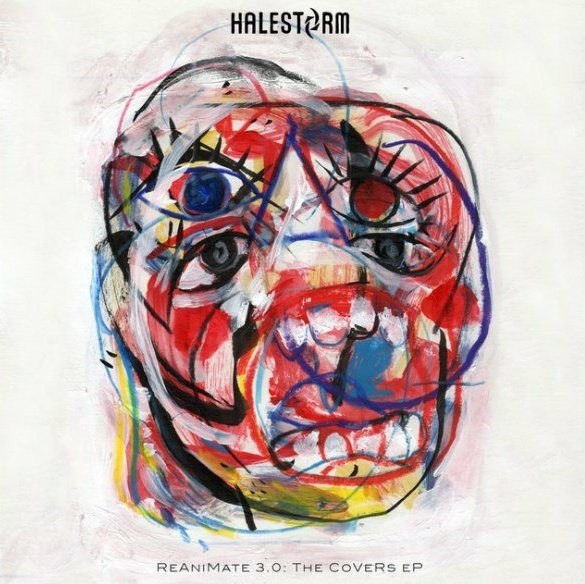