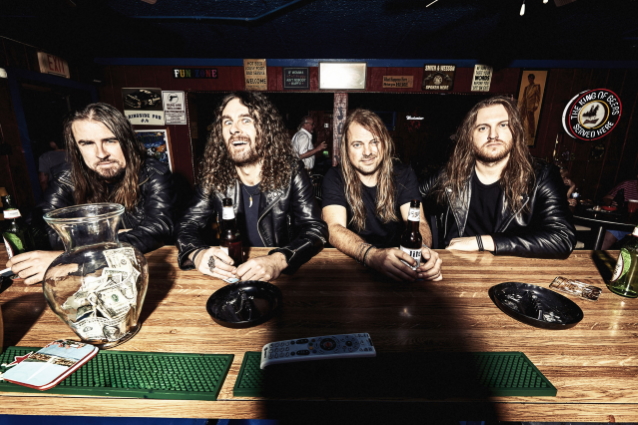 "Boneshaker" will be released on October 25 via Spinefarm Records. The cover artwork for the disc is a collaboration between Matt Read of Combustion Ltd., and Sean Tidy of Design House Studio Ltd.

With the creation of "Boneshaker", AIRBOURNE decided to take the bolder path; to align with Nashville's number one producer Dave Cobb, whose credits include both Chris Stapleton and "A Star Is Born" soundtrack, as a way of staking out new turf away from comfort zones and safe havens…

AIRBOURNE frontman Joel O'Keeffe states about "Backseat Boogie": "The riff, this is one of those ones where Cobb walked out and said, 'What are you playing there?' and I was, 'Ah, I'm just playing this riff. It's this riff I had in Australia. It's got a bit of a vibe. I'm not sure.' He goes, 'Aw, man, we gotta do that one,' and he got behind the drums and picked up Ryan's drumsticks and said, 'Oh, man. How does he play with these things? These things are baseball bats,' and it was just really funny. And Ryan jumped on the kit, and we tracked it right then and there."

Ryan O'Keeffe adds: "It all happened really fast. The band's lucky to have had a lot of time rehearsing together and playing together, but we tracked songs before we even thought we tracked them. He'd say, 'Give it another go if you want, but the one you just did, and here's the first one you did, and that's the vibe."

On the topic of the artwork, guitarist Matthew Harrison states: "The whole sentiment we were after was about rock 'n' roll for life. We wanted to create something tattoo worthy, and that the artwork was classic and stood the test of time."

Relocating to historic Studio A on Nashville's Music Row, six-time Grammy Award-winning producer Cobb's natural home and one of Music City's most prized creative hubs, the four musicians set themselves a challenge: to make a record cut from the same frayed cloth as those classic late-'70s recordings from Australia's legendary Albert's house of "Oz Rock" that inspired the band so much.

There are no weird tangents here, no un-called for asides, no messin' about. This is straight-down-the-line pure rock 'n' roll drama smelling of burnt rubber, spilt gasoline and valves glowing red hot. No ballads, no acoustic guitars, no keyboards. 10 tracks, 30 minutes of music. Everything lean an' lethal, stripped to the bone, to those essential elements that rock 'n' roll requires to properly do its work: raging guitars, pounding bass 'n' bass, vocals packed full of real personality — the kind of passion that only comes from willfully pursuing a life on the line.

"It's a live gig in the studio. This is always something we wanted to do — find a way to bring the soul and power of an AIRBOURNE live show into an album. Cobb caught our lightning and put it in a bottle," states Joel O'Keeffe.