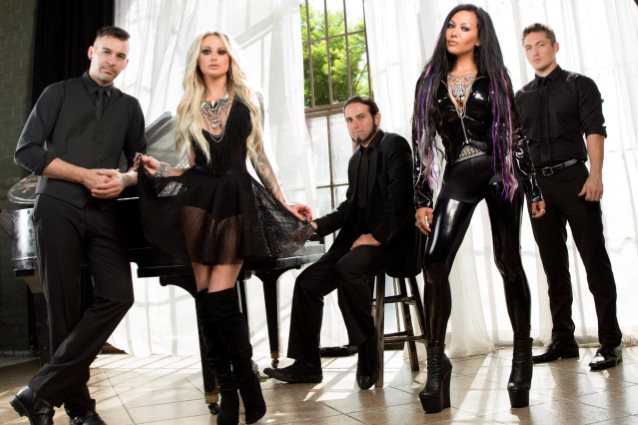 "Headspin", a brand new song from BUTCHER BABIES, can be streamed below. The track is taken from the band's third album, "Lilith", which will be released on October 27 via Century Media. The follow-up to 2015's "Take It Like A Man" was produced by Steve Evetts (THE DILLINGER ESCAPE PLAN, SEPULTURA, SUICIDE SILENCE) and marks the band's recording debut with new drummer, Chase Brickenden, who replaced Chris Warner last year.

Pre-orders for "Lilith" are available now in both physical and digital formats.

BUTCHER BABIES co-vocalist Heidi Shepherd stated about "Lilith": "After a year of writing and recording, we are thrilled with the growth and maturity of this album. Leading with our title track, 'Lilith', the artistic development within the band shines.

"We worked with producer, Steve Evetts, to bring you the rawest form of BUTCHER BABIES. No Auto-Tune, a hundred percent real drums, real guitars, real bass, and an all-out BUTCHER BABIES assault on your senses. As we know in this industry, these standards are quickly replaced by machines and can eliminate what makes a band an actual band.

"We are so proud of the hard work and dedication that each member of our team put in to create this masterpiece."

BUTCHER BABIES co-vocalist Carla Harvey told Meltdown Of Detroit's WRIF radio station that the music on BUTCHER BABIES' upcoming disc "runs the gamut" from "great thrash metal" to "a little bit of '90s influence." She said: "We're singing, we're screaming and it's just a great, great album. I couldn't be prouder of it. I think there's four songs where we do predominantly singing on it. And normally that would scare even me, 'cause I'm, like, 'I'm a metal girl! I don't wanna be singing.' But it's so beautiful — it really is. So it's kind of ballady, but not too ballady. It's very dark, sensual — the lyrics are very sensual on this album."

Although there is a lot of variety on BUTCHER BABIES' upcoming effort, Carla is quick to point out that "I couldn't do an album with no thrash on it, 'cause that's my passion. I think my favorite song on the album is a completely ridiculous thrash metal song that you'll hear," she said. "It's just amazing. In fact, one line in the song is about my Corvette that is always broken down. I have a '75 Corvette, 'cause I'm a real Detroit girl with a real American car. The song has completely ridiculous lyrics, but it's so cool — total thrash."

Carla said that BUTCHER BABIES next album will contain eleven songs, with an extra track for Japan. The disc's first single has "got a super-sexy rhythm to it," according to Harvey. "But everything is still… When you hear the album, you say, 'That's definitely BUTCHER BABIES.'"

According to Carla, Chase's addition to BUTCHER BABIES contributed to the upcoming album being "just on another level." She explained: "He's just a great, great, great drummer with all kinds of new ideas, and we blend really well together. And we actually toured with Chase on our very first tour with OTEP years and years ago, so we're all old friends already and he just fit in seamlessly."

Shepherd stated about the "Lilith" title and cover artwork, which can be seen below: "Historically, Lilith has become demonized as a representation of promiscuity and disobedience. We, however, see her as a positive figure. A symbol of autonomy, sexual equality, and full control over your own destiny.

"Lilith is the supreme representation of the left-hand path woman: independent, having discarded the patriarchal yoke, and not afraid to use all the tools available to her, including her sexuality, to gain the most out of existence. The eels in the cover art represent sleek symbolism of new beginnings and adventure.

"With this album, we have musically taken a leap through old boundaries and landed in new oceans. It is said that a the dream or visions of eels is confirmation that the path we currently lead is the right one.

"In this new chapter of BUTCHER BABIES, we welcome evolution as we bare ourselves with 'Lilith'."

Added Harvey: "When we were thinking of titles for our album, we wanted to find something that embodied sensuality, lust, danger and power. We kept going back to Lilith. We researched Lilith and her origins in different cultures and forms and knew that this figure, once feared but now a beautiful, symbolic middle finger to repression, would be a perfect representation of our album.

"The cover art we created with our graphic artist perfectly pulls together the last year we've spent working on 'Lilith'.

"I've always loved water themes and there is something terrifying yet calming about the deep sea; submersing yourself in it could be the death of you, yet at the same time it's cleansing and renewing.

"With this album we dove in fully and drowned ourselves in emotion, sexuality and even turmoil, and let the two-headed beast we created has emerged even stronger."

BUTCHER BABIES will support HOLLYWOOD UNDEAD on a U.S. tour which will kick off on October 1 in Atlanta, Georgia.