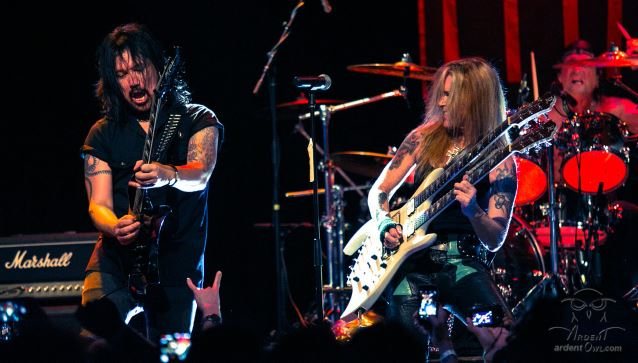 Hard rock queen Lita Ford has announced the addition of guitar player Patrick Kennison (THE UNION UNDERGROUND, HEAVEN BELOW) to her band. Patrick has been on the road with Lita and the rest of the group the past few weeks and is adding a new energy to the performances.

Says Lita: "Patrick Kennison is our latest and greatest addition to Team Lita! He shreds on guitar and is killer at singing backing vocals. He adds so much energy to the already thunderous sound, just another reinforcement that we will be blowing the doors off the place, and killing it in our future recordings. We are able to bring down the house together with Marty O'Brien jamming on bass and Bobby Rock behind us bashing the drums. Together they are the best of the best musicians, Hollywood California's finest lineup."

Adds Kennison: "It's both an honor and a blast to share the studio and stage with the queen of metal.

"I attended many Lita Ford concerts as a kid and was always blown away by her guitar playing and take-no-prisoners approach to the concert stage."

In other news, Lita narrated the brand new Randy Castillo documentary called "The Life, Blood And Rhythm Of Randy Castillo". The film is the story of the late drummer who played with OZZY OSBOURNE, MÖTLEY CRÜE, LITA FORD and other rock and roll icons of the 1980s and 1990s. The movie will premiere on November 4 at the Red Nation Film Festival in Los Angeles, California.

Ford's long-awaited autobiography will be released in the spring via HarperCollins. More details on the book will be made available soon.