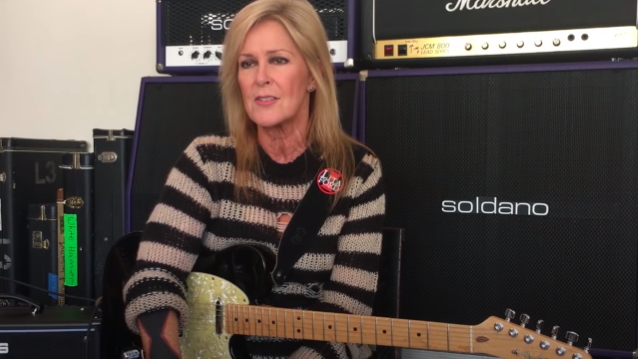 LITA FORD Went Into 'Stay Healthy' Mode While In Quarantine

Lita Ford spoke to Sweetwater's Nick Bowcott about how she has been spending her coronavirus downtime. She said (see video below): "In early March, we were on The 80s Cruise ship, and that's when everything got announced to us. Basically, 'Your summer's canceled.' And so we came off the cruise, and we just came home, and we've been home ever since. It was the second week of March. I had finished writing the record — the new record that isn't out yet — I had finished writing it, and to tell you the truth, I was so done with writing by the time that record was finished and recorded. We just finished it in January of 2020. And so I came off the road, and of course, you've gotta wind your gears down. I mean, it's so difficult to wind those gears down from being on tour. And I didn't wanna really write. I just kind of went into 'yoga mode' and 'stay healthy' mode — like, stay away from the refrigerator and try and get a little bit of cardio in. And, of course, where we are here in the Arizona desert, it's, like, 112 [degrees Fahrenheit]. So you get out and ride your bike at eight o'clock at night, it's about 108. So that's kind of what I do — I go out and I sweat and I mountain bike and do my yoga and try to stay away from the refrigerator."

Lita has spent the last couple of years working on her long-awaited new solo album. The follow-up to 2012's "Living Like A Runaway" is once again being helmed by guitarist/producer Gary Hoey, who contributes some guitar playing to the disc, alongside the rest of Ford's backing band, which continues to consist of guitarist Patrick Kennison, drummer Bobby Rock and bassist Marty O'Brien.

Last year, Lita told The Metal Voice that her new album will include a song called "Monsters", which was inspired by infamous cult leaders like Charles Manson and David Koresh. "It's just really dark and nasty stuff — brainwashing people and all the stuff [Koresh] did, and got all those people to drink Kool-Aid," she said. "But then again, it could be someone like your attorney, or it could be someone like your mom who is the monster in your life. It could be your manager. You never know who the monster in your life is gonna turn out to be."

Four years ago, Lita released an autobiography, "Living Like A Runaway: A Memoir", via Dey Street Books (formerly It Books),an imprint of HarperCollins Publishers.