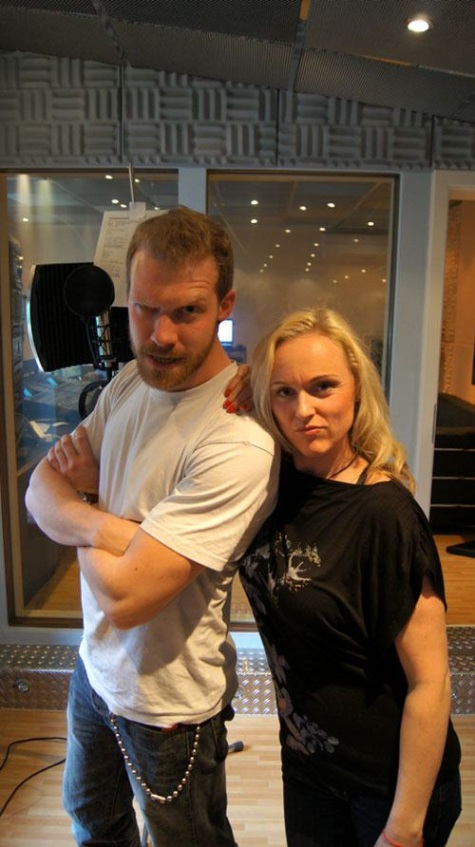 One of the tracks from Kristine's forthcoming CD is called "Vanilla Skin Delight" and is a duet with German singer Tobias Regner, the third-season winner of "Deutschland Sucht Den Superstar", the German reality show in the style of "American Idol".

Commented Liv: "[Tobias'] voice just fascinates me, and as soon as we had made the decision that we would want a male singer on 'Vanilla Skin Delight', I thought it would be just perfect having Tobias' powerful and warm voice completing this composition, i.e. turning it into a real rock song duet. Fortunately, our friend and movie-maker Konrad Hollenstein was able to provide us with the necessary contact information, thus we were able to get hold of Tobias the very next day. 48 hours later, Tobias knocked on the door and I was very happy and grateful that he had found his way to Mastersound Studio. We realized straight away that we have so much in common (sports, both being born on the country side, good and bad experience with the music business, touring, red wine, art...),despite the fact that we come from completely different musical backgrounds: Tobias winning 'Deutschland Sucht Den Superstar', the German version of 'Pop Idol', in 2006, compared to my own revolutionary beginnings with THEATRE OF TRAGEDY in the Nineties.

"Here we are, being duet partners in the same song. Moreover, it felt like we had known each other for a long time.

"Tobias is a very open-minded, warm-hearted and fine guy, with whom I really would like sharing stage with sometime in the future. He is a fantastic rock singer, and he is highly professional. I asked him to sing in the way he felt the most comfortable with. 'Vanilla Skin Delight' will blow you away!"

Added Tobias: "To be honest, I have to admit that the style of music that [Liv] is doing with LEAVES' EYES is not 100% my favorite one, so I don't know Liv as good as her fans do. I got to know her as a very open-hearted person who is happy with what she's doing and loves to sing and compose music. She was so down to earth that I didn't feel like standing in front of a star. We exchanged experiences concerning our musical past and after a glass of red wine we started recording. I think this must have been one of the most effective days of recording I've experienced so far. The atmosphere was so relaxed that there was absolutely no need to get nervous. I just felt very focused and into it. So after a few hours it was done, and Liv was very happy with my work."

Liv debuted one of her new tracks, "Libertine", at a special concert on December 2, 2011 at Alte Seminarturnhalle in Nagold, Germany under the banner "One Night With Liv Kristine". Liv performed acoustic versions of her original songs as well as a few covers, including tracks from LEAVES' EYES and THEATRE OF TRAGEDY.

Liv Kristine's third solo album, "Skintight", came out in North America in September 2010 via Napalm Records. The follow-up to 2006's "Enter My Religion" was recorded at Mastersound Studio and the artwork was created by Stefan Heilemann.