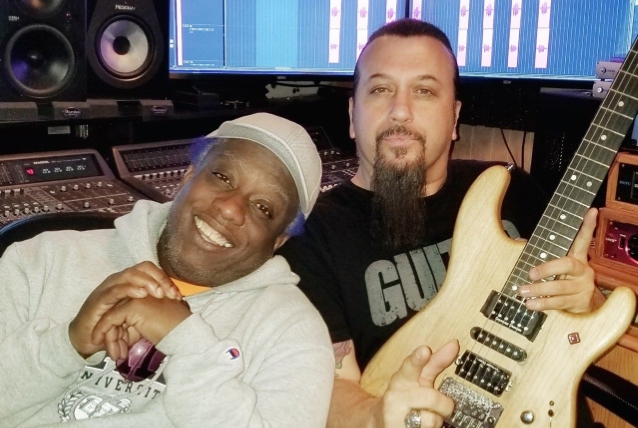 In a recent interview with the "Talking Metal" podcast, Orlando described the project's musical direction as "just straight-up rock. It's heavy rock. Of course, it's just one hundred percent chock-full of Corey Glover and my guitar styles. [It's] bluesy [and] funky. There's a little RAGE AGAINST THE MACHINE in there. There's a little bit of soul in there. All the stuff that I love kind of just melded into one melting pot. It's just a conglomeration of styles all melded into one. There's no one particular thing that it screams. It's just heavy, hard rock kick in you know what. [Laughs]"

Describing the upcoming album as "one of the best things I have ever done," Mike said that Corey "is not only the coolest cat going, but he is one of the greatest singers on this earth. It's such an amazing experience to play with Corey and to be doing an album with him."

He added: "It's everything you would imagine from Corey, and I add my element to it, which is different than I've ever done. It's not ADRENALINE MOB, it's not SONIC STOMP — this is something really cool and different for me, so it's even that much more special for me."

According to Orlando, nine songs have been recorded so far, with plans to possibly lay down a few more and complete the record by the end of 2019.

"[Corey] has a big schedule, and I've been doing a lot of stuff and working behind the scenes, redoing my entire recording studio and just getting really back into this now," Mike said. "So, yeah, it's just basically [a matter of] scheduling."

Orlando and Glover will play their first show together on September 9 at the Iridium in New York City.

Three years ago, Mike was injured in an ADRENALINE MOB road accident that resulted in the death of the band's bassist, David Zablidowsky.

At the time of the accident, ADRENALINE MOB was touring in support of its third studio album, "We The People", which was released in June 2017 via Century Media.

I could not be more excited to announce teaming up with one of music greatest singers.. the incredibly talented & Grammy...