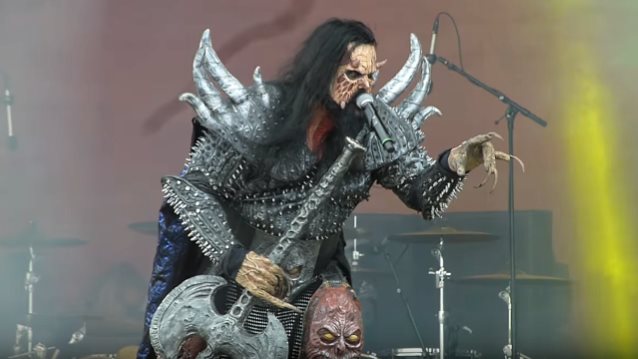 LORDI Mainman Says Heavy Metal Is No Longer The Law Of The Land In Finland: 'It's All Hip-Hop And Rap Now'

LORDI mainman Mr. Lordi says that heavy metal and hard rock artists have once again become marginalized in Finland, where the likes of CHILDREN OF BODOM and NIGHTWISH regularly topped the charts with their single and full-length releases.

After LORDI won the annual Eurovision Song Contest — which is usually known for its display of bland Euro-pop music — in 2006 with "Hard Rock Hallelujah", the band's success was being hailed as a major boost for tourism to their home country.

Asked by The Age Of Metal in a new interview if LORDI's Eurovision win helped move heavy metal even more into the mainstream in Finland, Mr. Lordi said (see video below): "Maybe for a short time, yeah, but it's been almost eleven years ago already. So maybe for a short period of time — maybe a year, a year and a half — it was a little bit more… metal and rock got a big boost in Finland, in Scandinavia, it definitely did that. But right now, at the moment… I'm an old-school rock guy, and I'm sad to say that it's all hip-hop and rap now everywhere. It's, like, metal and rock has been pushed again to the marginal [areas]."

Some even claimed that Finland was the only country in the world where metal was "mainstream," and people actually studied Finnish and Norwegian to better understand heavy metal music.