Finnish hard rock monsters LORDI have released the first photo (see below) of their new costumes via their official web site. All the costumes were designed by the group's mainman Mr. Lordi (real name: Tomi Putaansuu) and his wife and required several months to complete. Mr. Lordi's costume alone weighs more than 24 kilograms (approximately 53 pounds).

"We made five costumes and a spare for each member," Mr. Lordi says. "Since we needed to have the new costumes ready for the photo shoot to accompany the upcoming 'Deadache' album, we haven't been able to sleep been much lately."

LORDI's fourth studio album, "Deadache", will be released in the U.S. on October 28 and internationally in the same week. The Nino Laurenne-produced CD, much like its predecessors, is catchy, melodic hard rock, but this time around there is a rougher edge to the music.

A crucial element of LORDI's essence has always been the band's monster characters. As is customary for LORDI, the look of each character has been redesigned for this album; the new costumes will be revealed when LORDI headlines Popkomm in Berlin this October. Popkomm is where the world's music and entertainment business meets, each year it attracts over 10,000 music business professionals from all over the world.

Keyboardist Ms. Awa also promises something different. "The music is guitar-based rock, just the way a rock band should be. The album features sounds from the '80s: Hammond-style organs and a bit of ROB ZOMBIE style as well. All the experiences we've had and people we've met touring the world during the last few years have had their influences on the album."

The first single off the album, "Bite It Like A Bulldog", was serviced to Finnish radio last week. The song features a powerful bass line and was co-written by Mr. Lordi and bassist Mr. Ox.

Check out "Bite It Like a Bulldog" at ReverbNation.

LORDI's previous studio album, "The Arockalypse", has sold over 350,000 copies worldwide. The album has been released in over 30 countries, including the U.S. and Japan and the album has been certified over triple platinum in the band's home country of Finland, gold in Germany (100,000 units),and gold in Sweden (40,000 units). The single "Hard Rock Hallelujah" has achieved gold status in Germany (150,000 units). The new album, "Deadache", will be released in over 30 countries as well, including all of Europe, the U.S., and Japan. 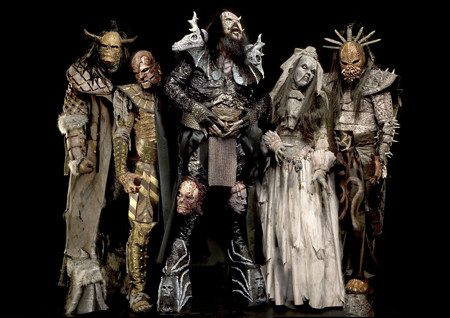