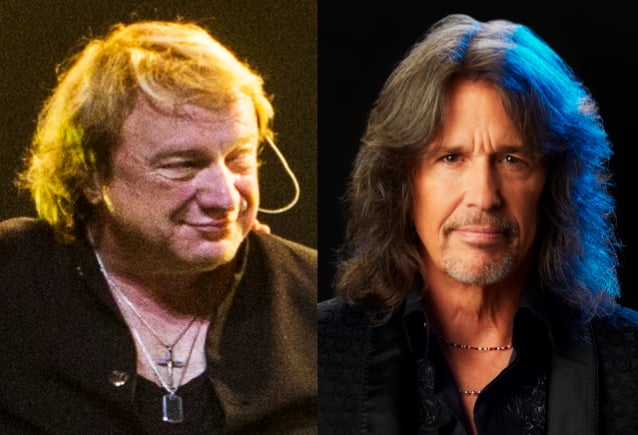 LOU GRAMM Accuses Current FOREIGNER Singer KELLY HANSEN Of 'Mimicking' Him: 'I Don't Take It As A Compliment'

In a new interview with John Beaudin of RockHistoryMusic.com, original FOREIGNER singer Lou Gramm was asked what he thinks of the band's current frontman, Kelly Hansen, who has been in the group for nearly two decades.

"Kelly is all right," Lou said (as transcribed by BLABBERMOUTH.NET). "He's a good singer. But I think Mick [Jones, FOREIGNER's founding guitarist and leader] really told Kelly, when he first got in the band, that he had to study me, because he sings those songs with the same musical innuendos and vocal licks and ad-libs as I have. He's mimicking me. His voice doesn't sound like me, but he's singing the songs the way I would sing them.

"I don't think he should sing the songs verbatim like me," Lou added. "Maybe sing a couple of parts. But let his own influences show — show the fans that he's the new singer now, not me."

Asked what it was like to share the stage with Hansen and other members of the current and original FOREIGNER lineup in 2017 and 2018 to celebrate the band's 40th anniversary, Lou said: "It was okay. [Kelly] was bouncing off the walls. He couldn't stand still or sit still. After a song ended, I couldn't even get a word to thank the audience or tell 'em that I was happy to be part of the reunion. At the end of the song, the last song hit, and there wasn't a quarter of a second of space before he was yapping away to the audience… It was, like, 'Jeez, will you quiet down for a minute?'"

Pressed about whether it is "over now" for him and FOREIGNER, Lou said: "I think so, yeah. I don't wanna be a part of it. Well, Ian [McDonald, guitar] has passed away and Ed Gagliardi [bass] passed away, even though he wasn't part of the reunions. Two original members of the six are now gone. And Mick is in very poor health. I think when the new FOREIGNER plays, I've heard that he comes on for one song and then waves and goes offstage. [In the recent past] he would play the whole last half of the set. But then he was in the hospital again for weeks. He had some heart problems and his recovery time was very long and tedious. And I heard that he comes out for one song now — when he comes on. Most of the time FOREIGNER has no original FOREIGNER members in it."

The 72-year-old Gramm left FOREIGNER for good in 2002 and has battled health issues in recent years, including the removal of a non-cancerous tumor. He told the Democrat & Chronicle in 2018 that he was planning to retire, but still reunited with FOREIGNER for several shows that year.

FOREIGNER replaced Gramm with Hansen in 2005. Jones, the only remaining original member of FOREIGNER, suffered from some health issues beginning in 2011, eventually resulting in heart surgery in 2012.