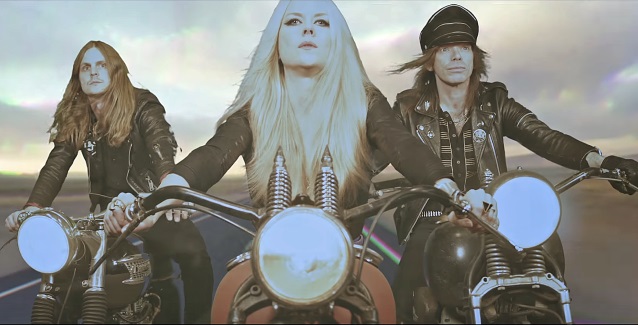 "California Son", the new video from heavy rockers LUCIFER, can be seen below. The clip was directed by Johanna Sadonis and Emil Klinta.

"California Son" is taken from LUCIFER's second studio album, "Lucifer II", which will be released on July 6 via Century Media Records.

Sadonis comments: "We are beyond thrilled to roll our heavy rock tank to the monster fortress of Century Media. What better place to kick off the new chapter! This should go together like Buck Dharma and his mustache. Here's to an unholy union!"

Jens Prüter, head of A&R at Century Media in Europe, adds: "We are very proud to support LUCIFER's next chapters. I met Johanna a couple of times and was always impressed about her strong vision for LUCIFER. The addition of Nicke Andersson makes it even more interesting, because he always contributed the highest level of rock 'n' roll to every band he has been involved in. Looking forward to see LUCIFER rising!"

With a shift of constellation within the band in 2016 and Sadonis moving from Berlin to Stockholm, LUCIFER is now ready for an exciting new chapter in its career. With Nicke Andersson, Sadonis found a congenial new songwriting partner, and "Lucifer II" turns out to be a strong sonic statement.

As a first glimpse at what is to come, the doomy single "Faux Pharaoh" was released in December 2017 and can be heard below.