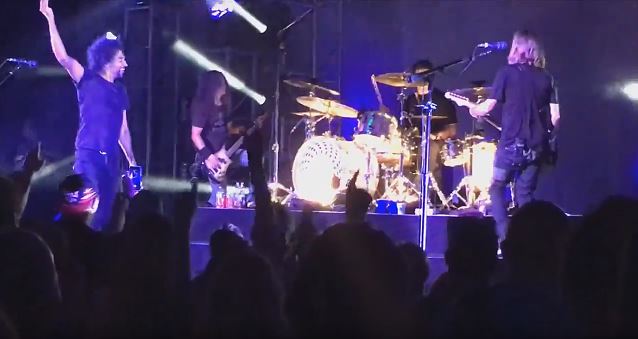 An ALICE IN CHAINS fan attending the band's show at the Performing Arts Center in North Charleston, South Carolina got the thrill of a lifetime when the band brought him onstage to perform their classic hit "Would?"

How'd it happen? The guy wore a t-shirt saying "Let me play drums on 'Would?'!"

Check out the video footage below.

"Baldy," the band's official blogger, recapped the event: "Today's lesson is about following your dreams. And persistence. And about getting lucky. All of these things were on display in Charleston, South Carolina last night, and it was inspiring (or entertaining at least).

"To his credit, he kept holding that shirt up throughout the show. And it paid off. The band had played the entire show, taken a break, came back out for the encore, played the first two songs of the encore, and were down to their last song. Which happened to be 'Would?'.

"That's when Sean came out from behind his kit, went up to Jerry's microphone, and told the guy to come up on stage. They threw a set of headphones on him so he could hear Mike & Jerry & William, and after a quick warm-up to prove he could actually play, they were off to the races. Mike stepped up onto the drum riser and began the intro, Jerry joined in, and then it was drum time. He started in at the right time, and although he had a couple of shaky moments, overall he did pretty good.

"Sean stood off to the side watching, while Jerry, Mike, & William all kept looking back at him or going up on the riser to make sure he stayed in time. Then towards the end of the song, for one terrifying moment, it all stopped. It didn't last long, but there was a second there when everyone thought our fill-in drummer had run out of gas, but a split second later he was back at it.

"He made his way to the end of the song, and the crowd went nuts. Back in the old days, it wasn't terribly unusual for Sean to bring people up from out in the crowd to attempt a drum solo or try and play a song. We talked about that on the bus after the show, and as Jerry said, 'No one ever made it all the way through. They'd always get nervous and flame out.' But one brave soul in Charleston, South Carolina made it all the way to the finish line.

"So kudos to you, sir. You're an inspiration to people everywhere that are armed with only a blank white t-shirt, a sharpie, and a dream. But I should mention that this little story is in no way to be taken as an endorsement or encouragement of that kind of request. This dude caught the band in a good mood and got lucky after all. Don't think that just because this guy hit paydirt that the band is suddenly going to start granting every request that's scribbled on a shirt and held up at the show.

"Holding up a sign asking William to contribute to your 401K or for Jerry to come to your house and meet your sister doesn't mean it's going to happen. But I suppose it never hurts to try…"