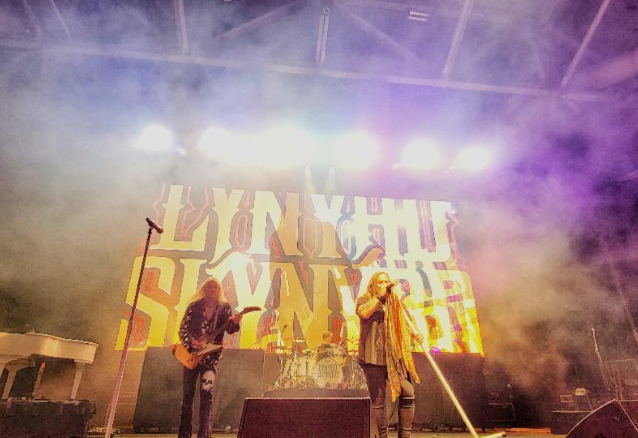 Additionally, 500 tickets to the show were donated to those heavily impacted by the record-breaking storm. Naples residents The Hallberg Family graciously purchased the 500 tickets to help victims have a night out after months of heartache. Concert organizers worked with local non-profit groups, churches, local law enforcement agencies and first responders to identify the ticket recipients.

A silent auction also helped raise funds and included one-of-a-kind memorabilia such as signed wrapped guitars from all the artists and more.

The event was produced by Live Nation and Ira Dean for Boots On The Sand, Inc. Proceeds from the concert will be directed to the Florida Disaster Fund through Volunteer Florida and Collier Community Foundation, Collaboratory and Charlotte Community Foundation.

LYNYRD SKYNYRD frontman Johnny Van Zant told ABC Audio about the event: "You know what? I think we've been blessed a million times over. And you got to give back when you're blessed. I think the good Lord wants us to do that. So I'm calling this a holy moment."

Boots On The Sand, Inc. is dedicated to the recovery of Southwest Florida in the aftermath of Hurricane Ian, one of the top five most devastating storms in U.S. history.

"I'm right off of the river: I got film of it ... I watched all these 16- to 18-foot waves roll in, destroyed the marina," Medlocke told ABC Audio. "Fortunately, I was blessed and my house escaped everything. But I got here about a week after it was over with and went riding around. And I couldn't believe it. I couldn't believe the devastation."

"We're happy to do this, to give an uplift to the community. I wouldn't miss this, y'know?" Medlocke added.