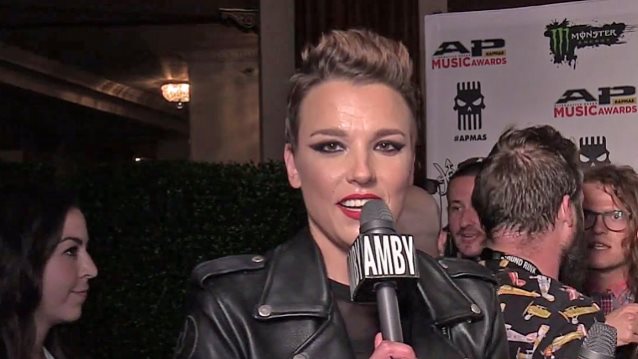 LZZY HALE Is 'Really Excited' About HALESTORM's Next Album

A Music Blog, Yea? conducted an interview with HALESTORM singer Lzzy Hale at the Alternative Press Music Awards on July 17 at KeyBank State Theatre in Cleveland, Ohio. You can now watch the chat below.

Speaking about the evolution of her songwriting, Lzzy said: "I think that the hardest thing that I've had to learn is how to trust myself, and as soon as I started letting go of a lot of the pressure that you might feel from, like, 'Oh, is radio gonna play it now?', expectations that now are present, because now I can call this a career, I'm going back to my four-track TASCAM [cassette-based home studio recorder] days and be, like, 'You know what? I'm just gonna have fun.' And then, all of a sudden, we ended up writing these five new songs that we were super stoked on, and I'm, like, 'I should do that more often.'"

On the topic of the progress of the songwriting sessions for HALESTORM's follow-up to 2015's "Into The Wild Life" album, Lzzy said: "So far so good. We're really excited. We're having a listening party with a lot of our team next month, and it'll be fun. We'll start to pick out what we're gonna do."

HALESTORM is collaborating with Nick Raskulinecz on material for the band's fourth album. At least some of the sessions are taking place at the Dark Horse Recording studios just outside Nashville.

Raskulinecz is an acclaimed producer who has previously worked with RUSH, KORN, ALICE IN CHAINS and DEFTONES, in addition to having helmed HALESTORM's third covers EP, "ReAniMate 3.0: The CoVeRs eP", which came out in January.