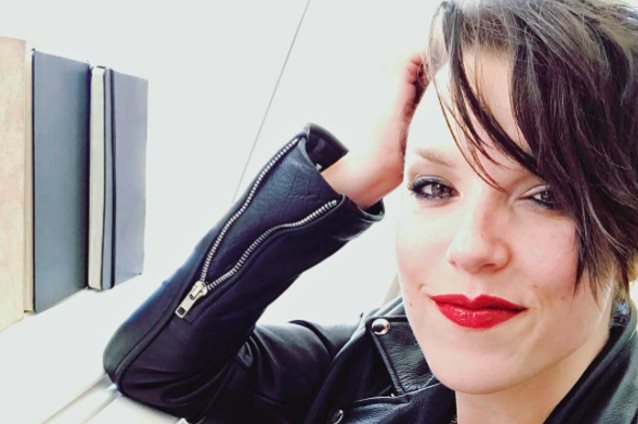 Eric Blair of "The Blairing Out With Eric Blair Show" conducted an interview with HALESTORM frontwoman Lzzy Hale at the Hall Of Heavy Metal History event, which was held on Wednesday, January 24 at the Wyndham Anaheim Garden Grove in Garden Grove, California. You can now watch the chat below.

Asked for her opinion of the #MeToo movement, which has inspired countless women to share stories about experiencing sexual abuse and harassment, Lzzy said: "As a woman in this industry, I understand the daily struggle; I go through it myself. I've dealt my entire career with sexist and condescending people. At the same time, I was raised by parents who didn't really put any limitations to my dreams or to my aspirations. As in whether I was a boy or a girl, if you wanna be a rodeo clown or a rock star or a doctor, it doesn't matter — you can do anything. So I was very naïve for a long period of time, because I just had blinders on and just did it. Same thing with my bandmates — I've been with those guys a little over 15 years now and I've never felt like I was viewed as somebody that's just there to pretty up the band or a marketing gimmick; it was always I'm just kind of one of the dudes. So when those things happen to me, I do kind of brush it off or you internalize. That's the beauty of music too. I feel like, as a girl, I would have reacted or maybe been more depressed about some of the things that would have happened in my life if I didn't have music. So in that aspect, I think it's great that there are girls that are being brave enough to speak out, I think that it's great that there's more awareness of the things that just go on every day, all the time. And I'll continue to support my peers in the rock and roll industry and music and whoever else needs me to do it."

Speaking about HALESTORM's upcoming follow-up to 2015's "Into The Wild Life" album, Lzzy said: "It probably is the heaviest record we've put out, but at the same time, we always consider it just a natural progression of who we are. Because when we make a record, that's kind of it — we don't like going back and trying to recreate something that we're already tired of. Especially this industry right now — it's like a three-year album cycle for rock and roll, whereas in other genres, maybe they put out a single every month or something like that. But when you put out an album [as a rock band], you go out and you tour and you do that, so you're a completely different person when you come off of it. So I'm not the same person I was on the last record. And so we're moving forward."

She added: "I will say something, though, for the drummers out there: you have never heard my little brother [Arejay Hale] sound like [he does on the new HALESTORM album]. So as a proud big sister, the drumming is phenomenal."

HALESTORM's new disc was recorded in part at the Dark Horse Recording studios just outside Nashville. Helming the sessions was Nick Raskulinecz, an acclaimed producer who has previously worked with RUSH, KORN, ALICE IN CHAINS and DEFTONES, in addition to having produced HALESTORM's third covers EP, "ReAniMate 3.0: The CoVeRs eP", which came out in January 2017.