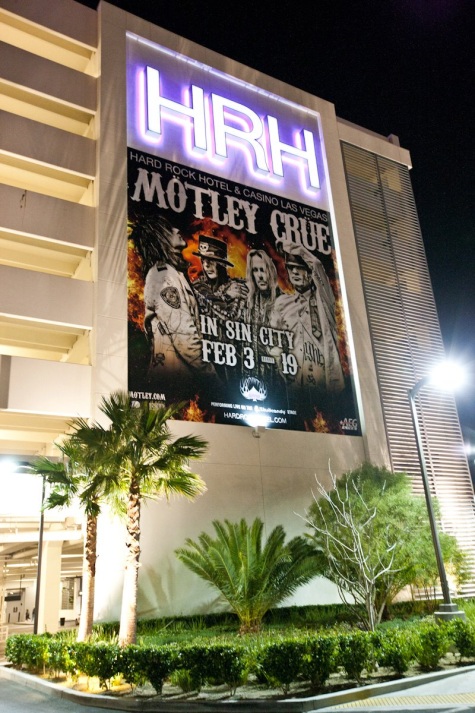 A two-minute behind-the-scenes look at opening weekend can be seen below.

The "Mötley Crüe In Sin City" experience got underway this weekend on Friday, February 3 — also declared "Mötley Crüe Day" by Las Vegas Mayor Carolyn Goodman — as The Joint transformed into a rock 'n roll carnival extravaganza bringing in elements of MÖTLEY CRÜE's arena show, including Tommy Lee's 360 drum coaster and the biggest lighting and sound production ever brought into The Joint, including their over the top signature pyrotechnics which fittingly incorporated a Vegas feel. The shows are produced and promoted by AEG Live.

From costuming — which included Vince Neil's illuminated poker-hand belt buckle and rogue carnival styled seat ushers -- to showgirl dancers, female aerialists, little people, macabre clowns and stilt walkers, each element dazzled the eye throughout. In addition to MÖTLEY's high-octane numbers, which included "Kickstart My Heart", "Shout At the Devil", "Saints Of Los Angeles", "Same Old Situation" and "Girls, Girls, Girls", the band also dedicated a portion of the show to an acoustic performance. High above the audience on a floating circular platform, they performed stunning renditions of "Without You", "On With the Show" and "Don't Go Away Mad (Just Go Away)". Other songs in the set included rare live gems "Piece Of Your Action" and "Afraid", which haven't been performed live in over 10 years.

On Saturday night (February 4),MÖTLEY was joined by their friend Jacoby Shaddix of PAPA ROACH who jumped on stage for "Smokin' In the Boys Room". Rumor has it that there will be more guests jamming with MÖTLEY CRÜE throughout the residency.

"The 'Mötley Crüe In Sin City' residency transformed the town, not only the Hard Rock Hotel," states Paul Davis, Vice President of Entertainment, Hard Rock Hotel & Casino. "It's never been done like this before." Billboards on the world-famous Sunset Strip in Los Angeles and the 15 Interstate upon entering Vegas beckoned fans to the Hard Rock. Upon entering the casino lobby, Vince Neil's custom 1932 Ford Coupe hot rod was displayed and poker players found themselves gaming on MÖTLEY CRÜE-branded tables. Even maid service signs for hotel guest rooms indicated cleanup for "Home Sweet Home".

On Sunday, February 5, the quartet returned for the third night of the run which lasts through February 19. Leading up to it, fans experienced the band's current KIA automotive TV commercial during the third quarter of the Super Bowl. The 60-second spot, titled "Drive The Dream", stars Vince, Mick, Nikki and Tommy in a race car dream sequence performing their 1989 smash hit "Kickstart My Heart". Victoria's Secret Angel Adriana Lima, mixed martial arts legend Chuck Liddell and champion bull rider Judd Leffew are also featured in the commercial.

Tickets, starting at $45 (plus applicable service fees) are available at the Hard Rock box office.