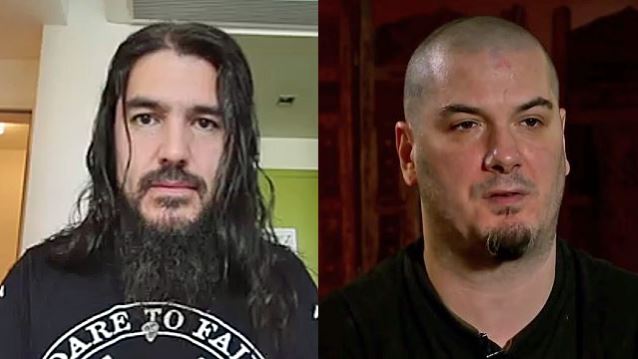 Anselmo performed the PANTERA classic "Walk" at the January 22 event at the Lucky Strike Live in Hollywood, California in honor of his late bandmate "Dimebag" Darrell Abbott. As he left the stage, he made a Nazi-style salute. He appeared to say "white power" as he made the gesture, but he later claimed he was referring to drinking white wine as part of an "inside joke."

Flynn, who performed at Dimebash alongside Anselmo and a number of other notable musicians, has uploaded an eleven-minute video response to the incident in which he called Anselmo a "big bully" and described Philip's actions as "fucking wrong."

A BLABBERMOUTH.NET transcript of Flynn's entire video message — which can be seen below — follows.

"And there you have it. The final words of 'Dimebash 2016': 'White Power'. Which was apparently just a joke, because they were drinking white wine backstage. [Laughs] Get it? White wine, white power. 'We were listening to 'White Christmas backstage, so I decided to throw out 'White Power.'' [Laughs]

"I was there, and I can tell you for a fact that there was not a Chardonnay or a Pinot Grigio in sight backstage. In fact, the only thing that you were drinking, Phil Anselmo, was Beck's — German beer. Maybe that's where the joke came from, huh? Get it? German beer. White power. Fucking hysterical stuff there.

"First of all, I would like to applaud Chris R, the courageous YouTuber who put up the inflammatory actions up on YouTube after originally editing them out when he put up his initial version of 'Walk' on YouTube.

"I can understand why you edited it out, Chris R, because, really, it was almost too much to believe, wasn't it? That this shouldn't somehow be seen. Thankfully, you decided to do the right thing and you put it up, knowing full well that you were going to get the wrath of the metal community. And you have. Over a thousand comments on your YouTube page. Five hundred comments on Blabbermouth. They shut down the comments page. Same with MetalSucks, who wrote a very poignant statement about not letting Phil Anselmo off the hook anymore.

[Editor's note: For the record, the BLABBERMOUTH.NET comments section for the article in question was never shut down.]

"And, you know, the crazy thing is that out of all the things that are being said, the majority of people are just, like, 'Oh, give him a bro. Here comes the PC police now and social-justice team.' And, 'You all just need to thicken your skin and stop being such pussies when somebody screams out 'white power' and 'sieg heils.'' 'Liberal this' [and] 'liberal that.'

"Only in the metal community is something like this so, so brushed off. If this was Chad from NICKELBACK, if this was Justin Bieber, if this was Tom Brady, if this was Lars fucking Ulrich, heads would roll. Holy shit! The goddamn shitstorm that would fly around if Lars Ulrich screamed 'White Power' from the stage. Or, shit, maybe he'd get a bunch of supporters: 'Good for you, dude! White pride!' And all the same silly arguments: 'Why is it okay for a black man to say, 'black pride,' but it's not okay for a white man to say 'white pride'?'

"Well, for one, in case you need a little brush-up on history, white men aren't oppressed by black people here in America. Black people have had a long history not just of slavery, but of a national, state-wise, city-wide, county-wide, neighborhood-wide level of oppression.

"I can tell you, seeing it myself, living in Northern California, I bought my second house, which I've since had to short-sell and now rent, but when I bought my second house, right there on the contract from a house that was built in the 1950s, it said, 'No Negroes shall live in this house or this neighborhood.' This is in a city called Pleasant Hill. [Laughs] But I guess back in the '50s, it wasn't so pleasant if you were a black man or a black woman. And that's the difference.

"You know, I'm not gonna go into the history of racism and black people getting sold by Africans, by their own… But I'm talking about in our lifetime — forty, fifty years now.

"No white person has been oppressed by black people. Quite the contrary. And it's not okay to scream out 'white power' and then brush it off as a fucking joke about white wine, especially when there was none.

"You know, the fact of the matter is, I was there at Dimebash [and] had a great time. [I] jammed with Dave Grohl, hung out with Zakk Wylde, Robert Trujillo, Dave Lombardo… It was a great vibe. And upon going backstage, I bumped into Phil and decided to strike up a short conversation as we were gonna play a couple of PANTERA songs together — I having toured with PANTERA back in 1997… twice. Within thirty seconds of sitting down and talking to him, his drunk ass decided to let me know in no uncertain terms that he hated the 'n*gger' era of MACHINE HEAD, referring to our third album, 'The Burning Red'. He hated every second of it. Hated it with a passion. The stupid look. [Laughs] I just laughed… in his face. I laughed in his face. I went, 'You are gonna sit there and judge me for the way I looked back in the day? For the music I was making back in the day?' Pot… meet… kettle.

"You know, the thing that's amazing about this is that we're all scared to say anything. Chris R was scared to put that video up. I am scared to put this video out. Because we all sit there and look at ourselves, and it reminds us of every time we've ever said the word 'n*gger.' And I have said the word 'n*gger' before. I was jumped by fifteen black guys. I was angry for a while. But, you know, that was in my twenties, and at some point along this journey of life, you change.

"You know, this has opened up a huge discussion within the band as to whether I should even respond to this or not. And the reason I feel so strongly about responding is 'cause I had to stand on fucking stage with you [referring to Anselmo]. And granted, I wasn't on that stage anymore when you said all that stupid shit. No, I was only on stage when we were playing 'A New Level' and you were 'sieg heiling' after [the words in the song's chorus] 'and power' — like you've done forever now. Like you've done forever now. And nobody calls you on it. No bands call you on it.

"You know, do I think we should go and lynch Phil Anselmo and fucking call for his head? No. You're more than welcome to say all of that shit. You live in America. Freedom of speech. You're free to say 'white power' and 'sieg heil' all you want. But that freedom of speech doesn't allow you freedom from the criticism of that speech. Because that shit's wrong. It's fucking wrong. And for somebody to sit there and go, 'Oh, if you were offended by this… blah blah blah.' If you weren't offended by that, fuck you. Fuck you! Fuck you!

"Goodbye, Phil Anselmo. I'll never be playing another PANTERA song again as long as I live. And to the metal community that backs this bullshit, see you later. Count me out. I want no part of this anymore."

Commenting on a YouTube video of the incident, Anselmo, posting under the username of his label Housecore Records, said: "Ok folks, I'll own this one, but dammit, I was joking, and the inside joke of the night was because we were drinking fucking white wine, hahaha — of all fucking things.

"Some of y'all need to thicken up your skin. There's plenty of fuckers to pick on with a more realistic agenda. I fucking love everyone, I fucking loathe everyone, and that's that. No apologies from me."

Proceeds from the Dimebash event will go to the Ronnie James Dio Stand Up and Shout Cancer Fund.