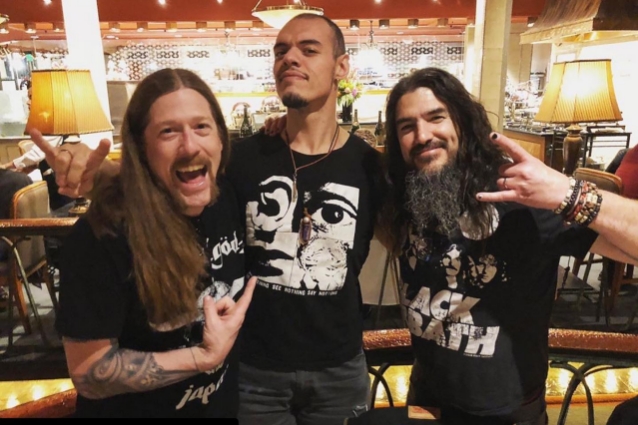 MACHINE HEAD's new track, "Do Or Die", is "by far the most extreme song" in the band's catalog.

The extraordinary claim was made by WARBRINGER drummer Carlos Cruz, who recorded the track last December with MACHINE HEAD frontman Robb Flynn and bassist Jared MacEachern at Sharkbite Studios in Oakland, California with producer Zack Ohren.

"Do Or Die" will be released next month to coincide with the announcement of the U.S leg of MACHINE HEAD's "Burn My Eyes" 25th-anniversary tour. The shows will see MACHINE HEAD's original drummer Chris Kontos and guitarist Logan Mader join the band onstage again to play the group's classic 1994 debut album in full.

On Tuesday, Cruz posted a photo of him with Flynn and MacEachern in the studio, along with the following message: "It was an absolute honor working at Sharkbite Studios with these giants! Thank you to Producer Zack Ohren, @robbflynn @jaredmaceachern & the MH team for the opportunity! New @machine_head song, 'Do or Die', will be released next month, feat. myself on drums! By far thee most extreme song in the #MachineHead catalog! All the best on tour, my dudes! #DoOrDie #HeavyMetal #ThrashMetal #RobbFlynn #Oakland"

Cruz stepped in to play on "Do Or Die" following the departure of MACHINE HEAD's longtime drummer Dave McClain.

"I had just been wanting to make music, and so right after we got done with the last tour, I was, like, 'I've gotta make music,'" Flynn explained during an August 23 Facebook Live session. "I had all these fucking songs written for months now, since April [of last year], and I wanted to go and write them and record them and jam them with the dudes. So my engineer Zack arranged for Carlos Cruz, who is the drummer for WARBRINGER. He played in POWER TRIP — an awesome new, modern thrash band. Sick-ass drummer — awesome drummer. Young guy, really cool. He came up and jammed with Jared [MacEachern, bass] and I. [He] just fucking killed it. It was awesome playing with him. And it really inspired me, kind of brought me out of my funk. I'd been really wanting to write new music for a while, and it was just right place, right time. The dude was amazing, and I can never be grateful enough for everything that he brought to the table. Awesome dude."