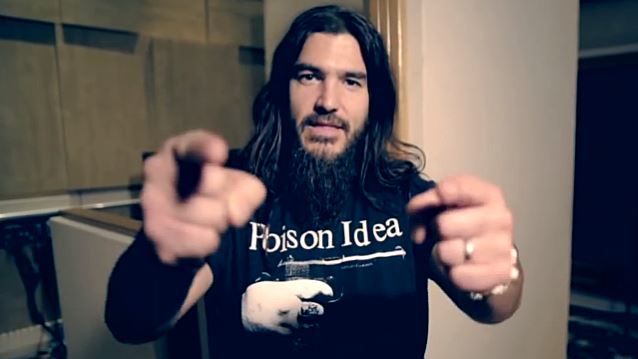 MACHINE HEAD's ROBB FLYNN Defends His AVENGED SEVENFOLD Takedown, Says It Was Done 'Out Of Love'

Robb Flynn of San Francisco metallers MACHINE HEAD has defended his withering and amusing takedown of AVENGED SEVENFOLD's latest album, "Hail To The King", explaining that bands "should be accountable to each other" and claiming that his comments were made "out of love."

In a lengthy critique which was posted at MACHINE HEAD's Facebook page in September 2013, Flynn wrote that the new AVENGED disc is a "blatant jackery" of material from other acts.

He didn't pull any punches, writing, "Congratulations to AVENGED SEVENFOLD on their latest 'covers album' coming in at #1. Who knew that re-recording METALLICA, GUNS N' ROSES, and MEGADETH songs could be such a worldwide hit!!?? Ba-dap Psssssss!!"

For No. 7, Flynn wrote, "Eyeliner sales skyrocket as thousands of heartbroken goth girls realize 'Hail To The King' is actually 'that ugly AC/DC band's song 'Thunderstruck'."

It was back to METALLICA for No. 3, as Flynn wrote, "'Black album' sales skyrocket as fans realize where new songs came from."

And at No. 2, he fired off, "After hearing AVENGED's GUNS N' ROSES cover 'Doing Time', Axl actually calls Slash, says, 'Dude, What The Fuck?!'"

In a brand new interview with UK's Metal Hammer, Flynn defended his right to voice his opinion about other artists' music, telling the magazine: "Oh man, I just feel that bands should be accountable to each other and if someone's not pulling their weight, say it! What's wrong with that? It's not out of hatred. It's out of love! Try harder, motherfucker!"

He added that he enjoys writing his regular online blogs, but admitted: "Sometimes I think, 'Should I even put this out? Am I just adding to the chatter of the world? Who the fuck would read this?' But I just feel like doing it and I enjoy it. I get a high from it. It's a way to connect and I guess it's for the same reason that I make music and play in a band — to feel connected. Most of the time, the majority of reactions I get aren't negative, they're super-positive and people thank me for saying that shit. And that means a lot to me."

Flynn said that he is not afraid to face the repercussions of his actions, explaining to Metal Hammer: "I've been asked, 'Don't you ever think you're gonna run into some band at a festival and they're gonna kick your ass?' [Laughs] The thing is, I used to be a drug dealer. I had people who had been up for fuckin' nine days on speed coming to my house and tweakin' and carrying guns. I had to deal with gnarly biker dudes buying speed. I ran with a crazy crew. The impetus for me starting MACHINE HEAD was me getting jurnped and my friend stabbed the guys that did it, and I had 12 dudes who wanted to fuckin' murder me. I didn't walk a split second outside of my house without a .45 in my belt. I remember those times. They wanted me dead and bad, for six or seven months. That was fear. When I write a blog, I'm just calling it how I see it and that's it. They're just words. If people can't take my opinions, don't read 'em.''

In his blog, Flynn maintained that he was just having some fun with AVENGED in his critique, saying he was "happy" for the band's success and adding, "While I like the new record, and really dug the last record 'Nightmare'… It's time to poke a little fun at A7X."

AVENGED SEVENFOLD singer M. Shadows told a Canadian radio station that he wasn't bothered by Flynn's comments. He said: "I have met Robb on numerous occasions and he's always been cool to me. And I just read it as a joke… I really don't know what to say about it other than I agree with him on the 'Sad But True' thing — that was obviously an inspiration for that song. Everything else, I kind of think he… If it is a joke, it was kind of overboard, 'cause it doesn't make sense in my mind."

Shadows added, "Some people might see it as being as an underhanded… joke. But, to me, if he just wants to go in there and write whatever he wants, I think that's totally cool. Everyone has an opinion and everyone should be entitled to say whatever they want. So it's no skin off our backs."

MACHINE HEAD's new album, "Bloodstone & Diamonds", will be released on November 10 via Nuclear Blast Entertainment. The CD was recorded in part at GREEN DAY's JingleTown Recording compound in Oakland, California. 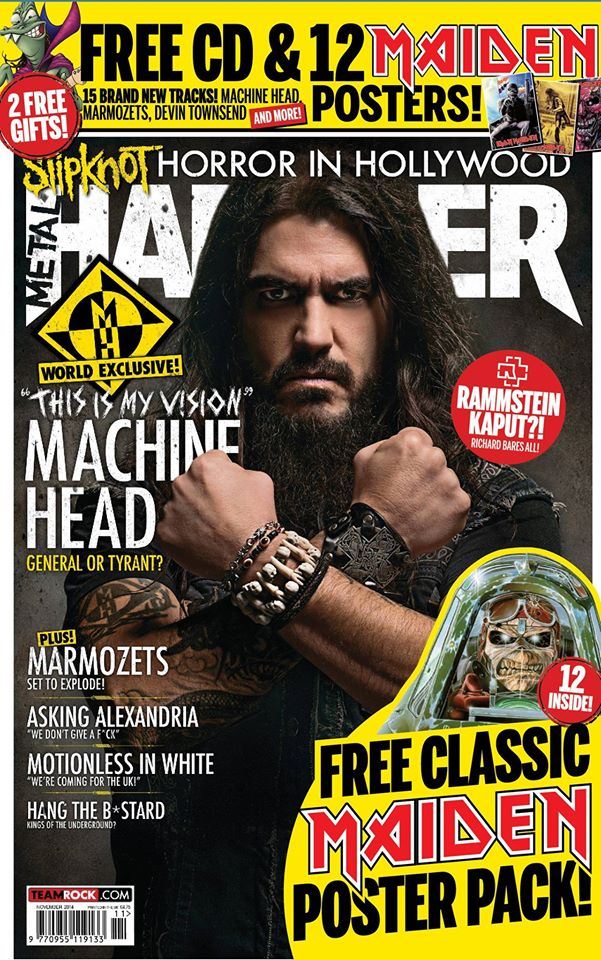