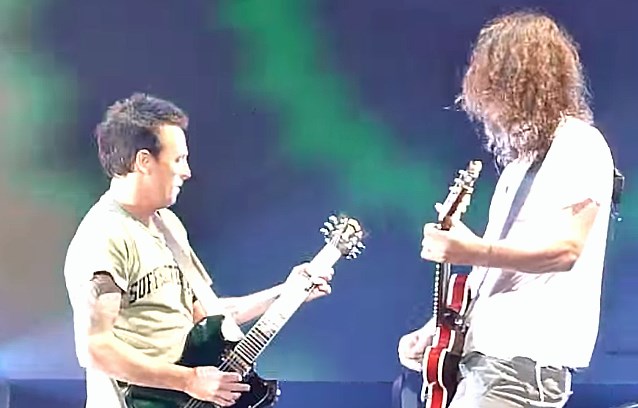 A couple of photos from the rehearsal sessions for the concert can be seen below.

Now in its fourth year, "Sonic Evolution" creates a bridge between the Symphony and Seattle's storied reputation as launching pad for some of the most creative musicians on the popular music scene. In celebration of the past, present and future of our city's musical legacy, Ludovic Morlot, and the Seattle Symphony commissioned three artists to write orchestral world premieres inspired by bands that launched from, or are related to, Seattle.

The first half of the program features three world premieres and Seattle Symphony commissions and co-commissions. French composer Yann Robin's "Ashes", a piece inspired by the iconic American rock band NIRVANA, which rose to fame in Seattle in the late 1980s, will begin the program. It is followed by "Beyond Much Difference" by Angelique Poteat, inspired by another legendary Seattle-based rock band of the 1990s, PEARL JAM. Poteat participated in the Seattle Symphony Young Composers Workshop from 2002 to 2004, and has since become one of the most promising young composers for new music. The Symphony commissioned Poteat to write a chamber piece, titled "Much Difference", for its May 5, 2014 concert at (Le) Poisson Rouge in New York City. "Beyond Much Difference" is an orchestral arrangement and expansion of the earlier chamber work.

The first half of the program concludes with "Waking The Horizon", a piece conceived by McCready (arranged by Scott Teske). Joining Ludovic Morlot, the Symphony, and members of Vocalpoint! Seattle on stage, McCready will perform during the piece.

Ludovic commented during a recent score reading with McCready: "With this collaboraton we are both coming out of our normal comfort zones. This is an incredible opportunity to learn from one another and give ourselves a chance to grow as artists."

"Above", the first and only album to be completed by MAD SEASON, featured McCready alongside vocalist Layne Staley (ALICE IN CHAINS),drummer/percussionist Barrett Martin (SCREAMING TREES) and bassist John Baker Saunders (THE WALKABOUTS, LAMONT CRANSTON BAND).

MAD SEASON lineup for the event:

Yann Robin's "Ashes" is co-commissioned by the Seattle Symphony and the Lille National Orchestra.

Angelique Poteat's "Beyond Much Difference" is generously underwritten by the Brian and Lynn Grant Family.