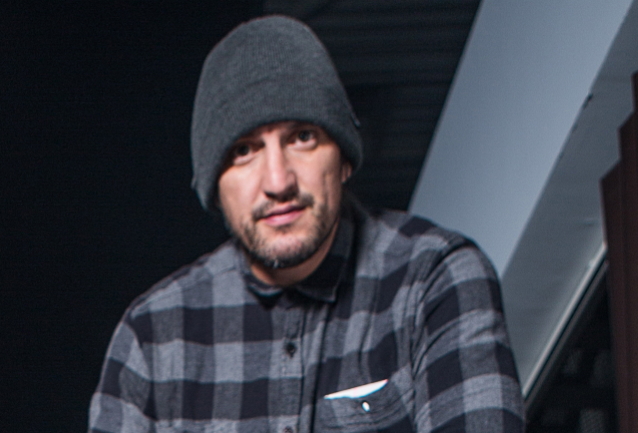 During an appearance on the "Riffs Or Die" podcast hosted by HAVOK's David Sanchez, vocalist Freddy Cricien New York hardcore veterans MADBALL discussed his band's recent announcement that they will not perform in any venue that requires audience members to be vaccinated against COVID-19. At the time, MADBALL said that it will likely not make any live appearances in its hometown "for a very long time" because it "cannot in good conscience play shows that require personal/private medical information (like vaccination status) for entry."

In early August, Mayor Bill de Blasio announced that New York will be the first U.S. city to to require COVID-19 vaccinations for concert attendees, although the city will not enforce the mandate until mid-September. Proof of at least partial vaccination will be required.

Addressing the fan reaction to MADBALL's stance on the issue, Freddy said: "I saw a lot of positive responses, but I did see some people speaking against it. Others were pushing their agenda, whatever it was.

Like antivaccine activists, talk show hosts, and far-right politicians, Freddy made the vaccines' "experimental" nature a talking point. He also suggested that rising COVID-19 cases are proof that vaccines are at least a partial failure.

"Here, take this shot that doesn't work," Cricien said. "Maybe I'm overstating that; maybe it works to some degree. But it's crazy. Take this experimental thing that has recently been proven to not do what a vaccine is supposed to do. Very weird. And then beyond that, there's some people that just don't get down with that stuff, and you have to respect that — be it for religious reasons, be it for personal reasons. Some people have medical reasons why they can't get vaccinated — legit medical reasons. I know many people that their doctors are, like, 'If you get this, you're not gonna do well.' So there's a multitude of reasons why people don't wanna get it, or can't. But now we're creating this situation where you have to get it to participate in society. That doesn't feel right to me on so many levels… It sets a bad predecent. It sets a bad example. Besides infringing upon human rights and civil rights, it's just morally, in every way, not right; it's wrong."

Freddy also spoke about the fact that some music venues across the U.S. are implementing requirements for attendance, including having audience members either provide proof of vaccination or a negative COVID-19 test.

Experts have repeatedly said that a COVID-19 vaccine is the single most important tool for preventing infections and protecting against moderate and severe disease. Some variants, such as delta, may be more likely to cause breakthrough infections, but vaccinations have shown protection against symptomatic disease caused by delta. Unvaccinated people are more likely to be hospitalized or die from COVID-19 than people who are fully vaccinated. In the United States, 97% of the hospitalizations over the past three months, since delta came on the scene, have been in unvaccinated people. Ninety-nine percent of the people who have died of COVID-19 in the last three months were unvaccinated.