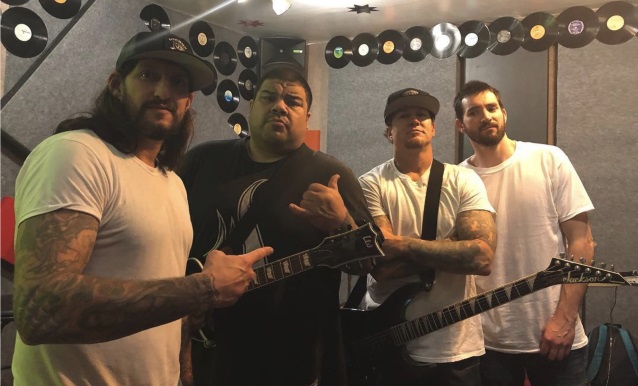 MADBALL To Begin Recording 'For The Cause' Album Next Month

New York hardcore veterans MADBALL will enter the studio next month to begin recording their new album, titled "For The Cause". Helming the sessions for the follow-up to 2014's "Hardcore Lives" will be RANCID's Tim Armstrong, a longtime friend of MADBALL singer Freddy Cricien. The new disc will be mixed and mastered by Danish producer Tue Madsen, who has previously worked with MESHUGGAH, THE HAUNTED and SICK OF IT ALL, among others. Former MADBALL guitarist Matt Henderson will lay down the guitar tracks in the studio, but will not join the group on tour.

Cricien told the NNC Hardcore Channel last November about the songwriting process for MADBALL's next album: "We've been writing in between touring, so that's why it's taken longer — because we have commitments that we have to follow through on, and then when we get a chance, we write in between. But we feel really good about the stuff that's coming out. Some of it has been around for a while and some of it is brand new, and it's all sort of really coming together now. I think it's gonna be one of the most diverse-sounding MADBALL records, maybe ever. As far as diversity goes, it's gonna have a lot of different elements that may surprise some people, but it's part of our evolution."

As for Henderson's involvement with the project, Cricien said: "He's not gonna be actively touring, because he just doesn't do that anymore — he has a family and other things going on. But he's definitely gonna play on this record."

According to Cricien, Armstrong invited MADBALL to be one of the first bands to record in his new California studio. "And he's sort of gonna be a producer," Freddy said. "I mean, we have a lot of ears — there's gonna be a lot of ears: Tim, Matt, us. We know our own stuff, so it's gonna be an interesting, fun time. It's gonna be cool."

Our brother Matt “Wildcard” Henderson, has joined us in the studio to iron out some final pieces. YES, he will be playing on the record! He will NOT be joining us for tours.... but as always, he will make appearances here and there - MB Lifer Squad! We start recording with our friend Tim Armstrong from @rancid in February.. He will also be lending us an ear on the Production side. Tue Madsen on the Mix and Master.. it’s on!!! #madballnyhc #matthenderson #timtimebomb #rancid #tuemadsen #theboat #forthecause2018