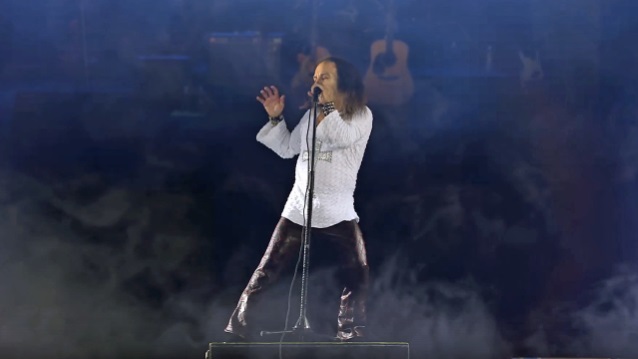 The company behind the hologram of Ronnie James Dio is going back to the "drawing board" as it prepares to launch the next leg of the "Dio Returns" world tour.

The legendary heavy metal singer died in 2010 at the age of 67 from stomach cancer. His hologram was created by a company called Eyeillusion and made its debut at the Wacken Open Air festival in August 2016 in front of more than 75,000 fans.

The production uses audio of Ronnie's live performances from throughout his career, with the DIO band playing live, consisting of Craig Goldy on guitar, Simon Wright on drums and Scott Warren on keyboards, along with Bjorn Englen on bass. Also appearing with them are former JUDAS PRIEST singer Tim "Ripper" Owens and ex-LYNCH MOB frontman Oni Logan.

In a brand new interview with Canada's The Metal Voice, Ronnie's widow Wendy Dio, who is a member of the Eyellusion team, said that while the European "Dio Returns" tour was a great success, a few changes will have to be made to the hologram before the trek returns to the road.

"We took the hologram tour out in Europe [last fall] to see if there was a market for it, because this is all very new — it's a new technology, and a lot of people are naysayers; some people think it's good, some think it's bad," Wendy said (hear audio below). "So we wanted to see if there was actually a market for it. We took it out across Germany, Spain, Budapest, London, Belgium and Holland, and it was very, very well received. Kids were crying to me and saying, 'Thank you so much for bringing Ronnie back to us.' And I think it was great for people that have been there and seen Ronnie before and wanted to see him back on stage [as well as] for the kids that never got the opportunity to see Ronnie. It was a good test, we did very well, but there's things I need to perfect on Ronnie. I'm really very critical. I need to perfect his face a little bit more — his eyes and his eyebrows are not quite right to me. So we're back on the drawing board right now. And we're hoping it will go out again probably the beginning of next year, and we will hit Canada and America. But it has to be right first."

Wendy added that while she understands some concertgoers may be reluctant to shell out money to watch the a digitized version of Ronnie perform live, the "Dio Returns" tour is something that should be experienced in person and not just judged based on a few low-quality YouTube clips.

"All the criticism is fine — everybody has the right to criticize something — but look at it and see it first before you criticize it," she said. "Because most of the people that criticize it haven't seen it and they don't even know what to expect. It's a whole experience that we take out. Ronnie comes in and out — you don't know when he's gonna come in or out. He does about six or eight songs — he comes in and out. The rest of the time is with Ripper and Oni singing the songs, sometimes singing together, singing alone. And what we are developing now is for Ronnie to sing together with them, so they sing different verses together. And plus, the band, of course, is superb — they are a fantastic band, because they played with Ronnie for 17 years, and he only picked the best. And then we also have all kinds of stuff going on with old photos of Ronnie, all different things going on at the same time, so it's like an experience — it's a whole experience."

Wendy went on to say that "a fortune" has already been spent creating the Ronnie James Dio hologram, with the ultimate goal of keeping the singer's memory and music alive.

"It's something that's done with love, and hopefully the fans will enjoy it and wanna see it," she said. "It costs a lot of money — it's not like something that we're making a bunch of money on — it costs a fortune. Right now, we're into, I think, two million dollars in developing it. But it's something that we wanna do. We wanna keep Ronnie's memory and his legend alive all the time. From the day Ronnie passed away, I wanna keep his music and his legend alive, because he was such an amazing person."

Back in January, Eyellusion CEO Jeff Pezzuti posted a message on the company's official web site thanking fans for their support and underlining the project's goal of sharing the gift of Ronnie's music with future generations.

"It's not easy to be the first to do something in an industry that doesn't change all that often," he said. "But we're fans first. We had a vision that the music that has helped form the foundation of rock and roll should be passed down for generations and generations to enjoy. In the current business climate, that means live tours. After all, there's nothing quite like leaving everything behind for just a night to join fellow fans for an unforgettable experience. It's about the sound, the lights, the memories — just getting lost in the moment.

Goldy last year disputed the assertion that he was doing the "Dio Returns" tour as a way of "cashing in," explaining that he is "always out of pocket on these things." Craig added that while he is aware some of Dio's fans have an issue with the hologram tour, "many people understand the simplicity of this. It's not anything other than a grand gesture with the lights from the same gifted man who was the lighting director on the 'Sacred Heart' and 'Dream Evil' tours, the images on the two screens on each side of the stage, and only a handful of songs done with the hologram," he said.