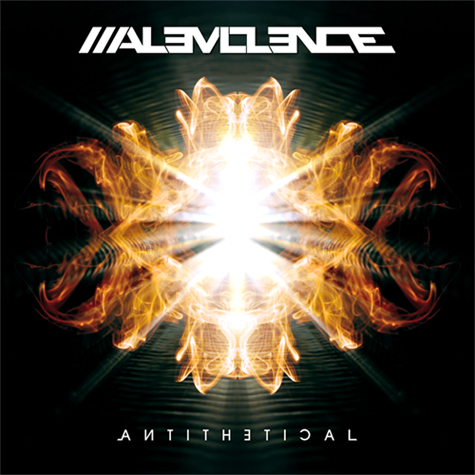 "Slithering", a brand new song from Portuguese extreme progressive metallers MALEVOLENCE, can be streamed using the SoundCloud player below (courtesy of Decibel magazine). The track comes off the band's upcoming third full-length album, "Antithetical", which was written and produced by Carlos Cariano, recorded by Paulo Pereira at 20m2sea Studio (Portugal),and mixed and mastered at Woodshed Studio (Germany) by V. Santura (TRIPTYKON, OBSCURA, PESTILENCE).

The very striking illustrative piece was produced by the design bureau Kkstructures. "By portraying the central album conceptual theme fueled by the art of conflict, Kkstructures, in straight involvement with the band, twisted an eye-catching visual parallelism dissecting the antithetical contrasts between the positive and negative extremes," according to a press release. "Transcending the opposites by mode of individual revelation (summon insurgence) whilst erecting a differing perspective throughout exorcising thesis, the visual mind bending design brings forth in the process the social global context trivialization invoking an upheaval synthesis. The fire combustion epitomizes the universal purification (in need) as an unrelenting way of forward critical thinking."