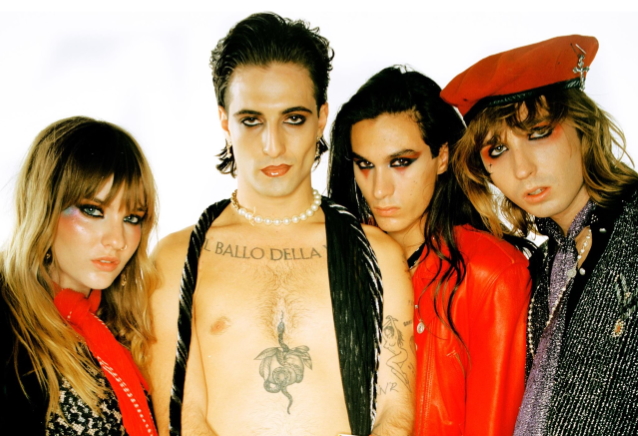 Italian rockers MÅNESKIN have announced details for their first world tour, which will consist of 48 dates spanning across North America and Europe. The "Loud Kids" tour dates, produced by Live Nation, have expanded to include the band's very first headline tour of North America, as well as upgrades and additions to their rescheduled European indoor shows due to popular demand.

Commencing on October 31 in Seattle, the tour will see MÅNESKIN play 17 North American cities — including stops in New York, San Francisco, Las Vegas, Washington and Canada — before embarking on their rescheduled European tour in 2023, plus new dates.

MÅNESKIN said in a statement: "We're so thrilled to be able to finally tell you that our 'Loud Kids' tour just got sooooo much louder, worldwide — and will now see our very first headline tour in North America."

Prior to launching the extensive "Loud Kids" world tour, MÅNESKIN will also continue its surging connection with fans around the world by taking the stage at many major festivals, including Coachella, Reading, Leeds, Rock In Rio, Pinkpop, Rock Im Park, Rock Am Ring and more.

MÅNESKIN is a critically acclaimed four-piece-band that began busking on the streets of Rome as teenagers, and now just a few years later, are a razor tight group of captivating musicians widely hailed for being at the forefront of driving a worldwide resurgence of rock music. The past year has seen the band collect over three billion streams, while surging to No. 1 in numerous countries and across the global charts of multiple digital platforms (including the No. 2 TikTok song of 2021). Within just two and a half months of their very first visit to the United States for landmark showcases at the Bowery Ballroom (New York) and The Roxy (Los Angeles),MÅNESKIN have skyrocketed from the massive support of social platforms, nationwide radio, an opening slot invitation from THE ROLLING STONES and multiple breakthrough TV appearances such as "The Tonight Show", "Ellen", "The Voice" and the American Music Awards. This resulted in numerous and record-setting Billboard No. 1 chart placements, including "Top New Rock Band Of The Year" and 2021's longest #1 run at Alternative radio. With no slowdown in sight, MÅNESKIN most recently made a global-trending debut appearance on "Saturday Night Live", were announced as Coachella performers, and were hailed by the Los Angeles Times as "America's New Favorite Rock Band." 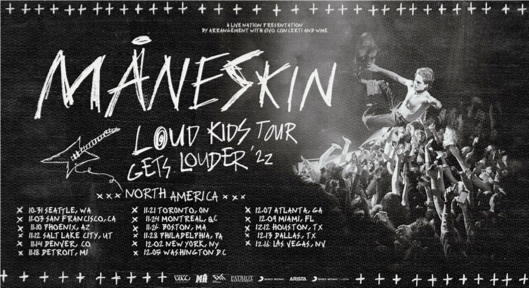